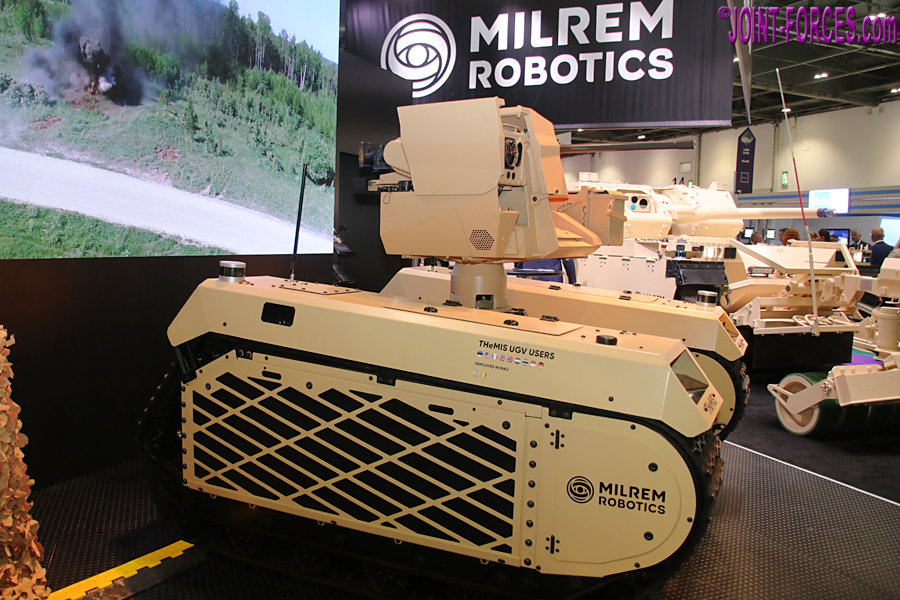 At DSEI 2021, Hornet and Milrem Robotics have exhibited a new combat UGV which marries a French RCWS to an Estonian THeMIS platform.

The system features Milrem Robotics’ THeMIS unmanned ground vehicle (UGV) with the Hornet Remote Controlled Weapon System (RCWS). The Hornet was developed for the new French 4×4 and 6×6 armoured combat vehicles of the ‘Scorpion’ programme, however it offers unique features for UGV applications.

“The Hornet includes a specific cleaning system for the optronics as well as the option to flip down the sensors to protect it from dirt and damage – crucial aspects for an unmanned vehicle operated from a distance. It’s also equipped with a protected ammunition feed,” explains Jean Boy, Managing Director of Hornet, adding that the Hornet was developed keeping in mind the French Army’s high standards for firing accuracy.

THeMIS Combat UGVs provide direct fire support for manoeuvre forces acting as a force multiplier increasing stand-off distance, force protection and situational awareness. The THeMIS is equipped with intelligent functions such as waypoint navigation, follow-me, obstacle detection and avoidance. The intelligent functions are only used for mobility and the weapon system has a human in-the-loop control.

“Combat robotics is the future of warfare that will significantly increase the capabilities and survivability of units. Milrem Robotics’ THeMIS is the preferred UGV for weapon systems integrations. With the future-oriented Hornet that has several innovative features, we have created an unmanned system that allows combat units to encounter today’s challenges on the battlefield more effectively,” said Captain (res) Jüri Pajuste, Director of Defence Research and Development at Milrem Robotics.

Milrem Robotics is the European leading robotics and autonomous systems developer and systems integrator. The company is mostly known for its THeMIS Unmanned Ground Vehicle intended to support dismounted troops and the Type-X Robotic Combat Vehicle, a wingman for mechanied units.

Hornet is dedicated to the promotion and marketing of the Hornet range of remotely operated turrets. It was officially launched at IDEX 2021 in Abu Dhabi. Hornet offers high-end remotely operated weapons systems with the most advanced technologies and capabilities, which can be adapted to fit very specific tactical needs, including UGVs. The current offering includes the Hornet, the flagship product of the new range, and the Hornet Lite, a lighter version with the same optronic systems. These RCWS fully enhance the capabilities of the vehicles equipped, taking them to fully new operational levels.

All Hornet RCWS users benefit from the feedback and possible upgrades to the range. The remote-controlled weapon stations of the Hornet range are very versatile products, combining an effector and latest generation sensors. This makes them the tool of choice for observation, reconnaissance, and intelligence, but also for information sharing, blue / red force tracking, designation of enemy targets and indirect fire guidance.

The Hornet stations are also incomparably more accurate than the previous generation of turrets, particularly in movement. They are gyro-stabilised from the optronic unit, which gives them exceptional stability and accuracy. The probability of hitting on the first shot is enhanced by a sophisticated ballistic solution calculation system that considers various parameters such as weapon, ammunition type, range, target movement and vehicle behaviour.