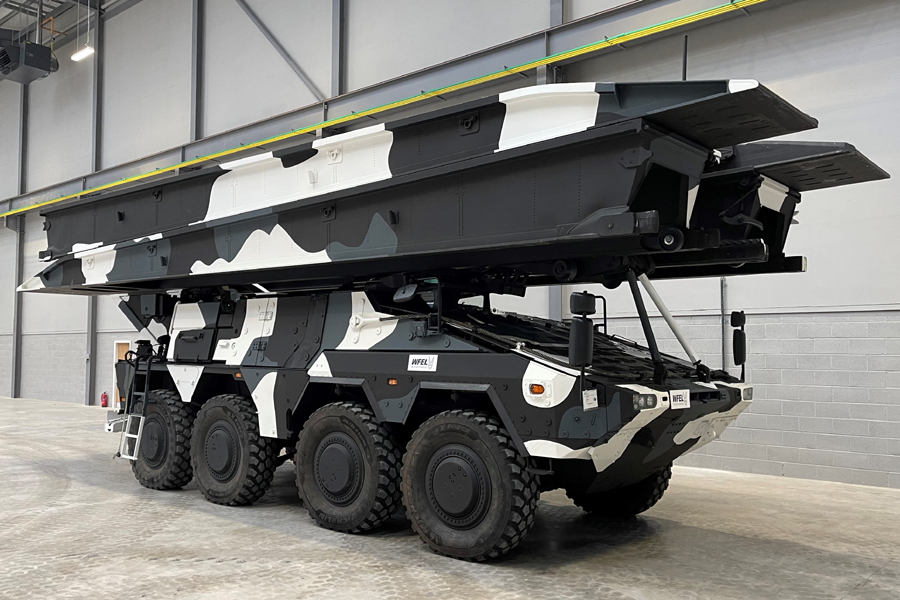 WFEL extends its range of Rapidly Deployable Mobile Bridges for military and disaster relief at DSEI 2021 with a Boxer Bridge-layer.

Press Release, Stockport, 25 August 2021: WFEL is showcasing its military bridging systems at DSEI London, 14-17 September, and a new collaboration between WFEL and its parent company KMW – the Boxer Bridge-layer – will be on display, the first time it is being shown at a Defence Exhibition.

The new Boxer bridge module can deploy two types of bridge: a heavy variant which spans 14 metres and can carry 80 tons and a longer version of 22 metres, certified for 50 tons.

WFEL is discussing its range of rapidly deployable bridging systems alongside KMW. WFEL’s DSB Dry Support Bridge and the MGB Medium Girder Bridge are already held in inventory by many militaries worldwide.

At 120 Military Load Classification (MLC), the DSB can get traffic and supplies moving over a 46-metre gap in less than 90 minutes using just eight soldiers and a single launch vehicle: crucial in rapidly escalating combat, homeland defence or disaster relief scenarios – when every second counts.

For those military personnel unable to visit the show in person due to COVID travel restrictions, WFEL can also be contacted via the DSEI Connect service.