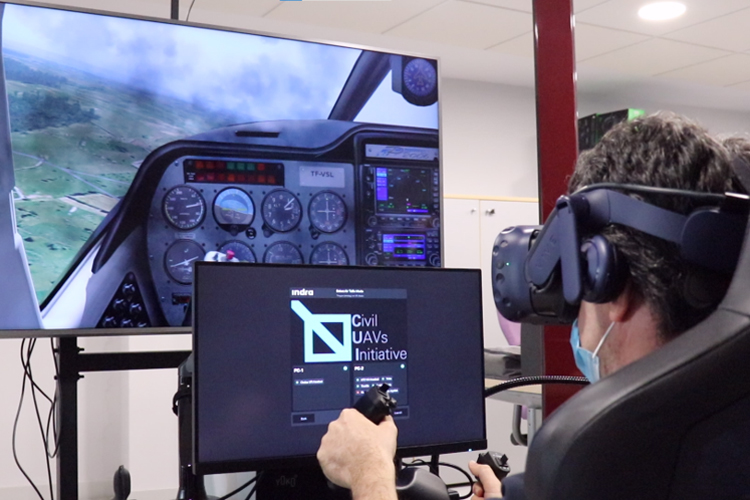 Indra develops SIMCUI ~ a Virtual Reality-based simulation system that halves the time it takes to train a civilian or military pilot.

Press Release, Madrid, 07 July 2021: Indra, one of the world’s leading technology and consulting companies, has developed the SIMCUI, a new multi-purpose and inter-operable simulation system that’s easy to transport and install anywhere. It can halve the time required to train a civilian or military pilot of any type of plane, whether it be a fixed-wing, rotary-wing or remotely-piloted aircraft.

To do this, it has developed a high-quality and extremely cost-effective system that’s easy to maintain and operate. It’s been designed to enable every two or three students to have their own simulator so that they can complete all their training on it. The number of flight hours is thus multiplied and the theory is learned directly in the simulator. The system incorporates virtual reality glasses that not only increase the realism but also allow the students to connect from home to continue with their training. They can also help the pilots prepare for higher-risk flights and, in the military sphere, training and tactical flights.

The solution also incorporates Artificial Intelligence algorithms to measure the performance of each of the pilots and analyse their strengths and any room for improvement. The development of this system uses flight models fully adapted to the needs and degree of realism required by each customer, whether it be a small flight academy, an airline or an entire air force. It currently has 18 simplified models ranging from a Boeing 737 and the F18 fighter jet to Beechcraft and Tecnam light aircraft models and Sikorsky and Airbus civil and military helicopters, among many others.

In order to multiply the number of simulators that a customer can acquire, Indra has reduced the simulator’s structure to the minimum while maintaining the highest possible visual quality with a state-of-the-art Invis4 system and employing touch panels that replicate the aircraft’s flight instrumentation in different configurations, depending on the type of aircraft. The controls and throttle levers are quickly and easily interchanged, depending on the type of aircraft in which the exercise is to be performed. A motion platform can optionally be added.

Indra has also prepared this system to train pilots of remotely operated aircraft. More specifically, the SIMCUI incorporates the flight model of the Targus, an optionally manned MALE (medium-altitude long-endurance) aircraft, the most advanced of its kind manufactured to date in Spain, which Indra has developed in partnership with the Government of Galicia as part of the Civil UAVs Initiative.

Training during international missions: The reduced weight of the SIMCUI’s structure makes it easy to move and install quickly wherever it’s required. In the military field, this means that it can be transported to the area of operations to enable the pilots to prepare their missions before conducting them. Each of these simulators is designed to network, interact and share a single virtual scenario. Military pilots are thus trained in the same way as they operate during real missions.

With this new system, Indra meets a need in the market that had been detected. More and more airlines, air forces and pilots are demanding ongoing training to complement what they receive from the highly realistic simulation systems by means of which they are examined to obtain their licenses and certifications.

Indra is one of the world’s chief suppliers of simulation and training systems, with hundreds of systems delivered across the five continents. It develops systems for all kinds of terrestrial, naval and aerial platforms. In the aeronautical field it’s the company that has developed simulators for the largest number of helicopter models. It has also worked on the development of advanced simulators such as the Eurofighter, the A400M and the NH90 helicopter.