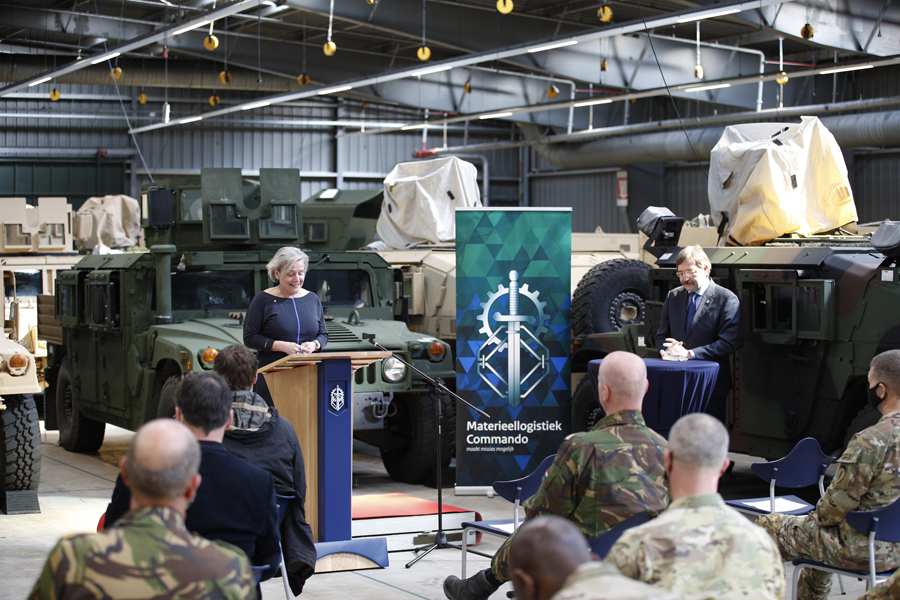 The Dutch Ministry of Defence is to invest 38 million Euros in the Eygelshoven US Army Prepositioned Stocks (APS-E) storage and maintenance site.

News Release, The Hague, 24 March, 2021: The Eygelshoven pre-positioned stocks site and maintenance facility is to undergo an overhaul. The Netherlands Ministry of Defence is to invest 38 million Euros in the improvement of the storage hangars at the site and the surrounding infrastructure. Ank Bijleveld-Schouten, the Netherlands Minister of Defence, made the announcement during her visit to Eygelshoven Base today [24th].

Army Prepositioned Stocks Eygelshoven (APS-E) is used by the United States. There are currently 765 American vehicles, such as Hummers, earthmovers and transport vehicles housed in the hangars in southern Limburg. There are also over 6,500 pieces of equipment in storage, including various types of container, generators and general equipment.

New jobs: The overhaul includes plans for improving the rail connection adjacent to the site and the storage hangars in which Dutch personnel carry out their work. New storage hangars will also be built. The investment will create new jobs, particularly for local workers.

The planned improvements are necessary due to the fact that the US wishes to expand and intensify its use of APS-E. Although the US is responsible for the on-site infrastructure, the Netherlands intends to assist the Americans, as this will also improve the working and living conditions of Dutch personnel based at the site.

With this new investment, the Netherlands will also be bolstering the measures aimed at credible deterrence and the collective defence of NATO territory. “This investment not only contributes to bilateral relations between the US and the Netherlands, but also to trans-Atlantic and European security”, remarked Bijleveld.

During her visit to APS-E, Bijleveld was flanked by, among others, acting US ambassador Marja Verloop, the Commander of the Royal Netherlands Army Martin Wijnen and General Joseph F. Jarrard, the Deputy Commanding General of the US Army Europe.

DEFENDER-21: APS-E personnel are currently preparing for Exercise Defender-21, a large-scale international exercise in which the US Army will test how rapidly it is able to deploy in Europe in response to a threat. The Netherlands, as transit nation, has an extensive transport network and will lend host nation support. Materiel will be transported from APS-E to various exercise areas throughout Europe.