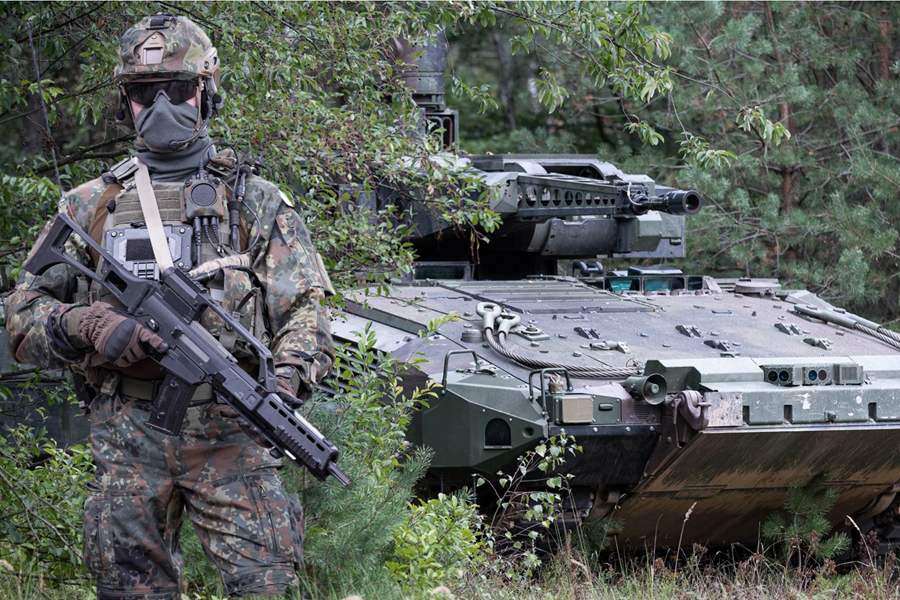 The German Army has declared System Panzergrenadier fit to fight ~ a milestone for the Puma IFV and Future Soldier – Expanded System.

Press Release, Düsseldorf, 19 March 2021: Supplied by Rheinmetall and its partner companies, the Bundeswehr’s System Panzergrenadier has reached an important milestone.

On 18 March 2021, Lieutenant General Alfons Mais, the Chief of the German Army, declared the system fit to fight. He also recommended equipping NATO’s spearhead formation, the Very High Readiness Joint Task Force (VJTF) 2023, which the Bundeswehr will be furnishing, with the new system. In essence, System Panzergrenadier consists of an upgraded version of the Puma – the infantry fighting vehicle made by the Rheinmetall and Krauss-Maffei Wegmann joint venture PSM GmbH – and the VJTF2023 version of the Future Soldier – Expanded System (IdZ-ES) developed by Rheinmetall. Following extensive development and modification work, System Panzergrenadier underwent a three-week-long tactical evaluation at the Bergen major training area on the Lüneburg Heath in northern Germany in February 2021. It passed the test with flying colours.

System Panzergrenadier will substantially enhance the fighting strength and combat effectiveness of the VJTF 2023. Equipped with System Panzergrenadier, this formation will, for the first time in Germany, bring together a digitised vehicle platform – the enhanced VJTF version of the Puma infantry fighting vehicle – and a soldier system equipped for digital radio communication.

System Panzergrenadier offers two key advantages: first, all soldiers, whether mounted or dismounted, can access the same information; and second, they are able to share this information with greater precision, more quickly and more robustly. The closely knit network of sensors and effectors belonging to the soldiers and their infantry fighting vehicle minimises the time between target detection and target engagement. This blending of capabilities into a single overarching system enables more effective tactical interaction of the soldiers and their IFV, enhancing in turn the overall combat effectiveness of mechanised infantry units.

A total of forty VJTF-grade Puma infantry fighting vehicles will form part of the VJTF 2023 panoply of equipment. The most advanced version of the Puma to date,it includes, among other things, integration of standoff-capable effectors like the MELLS multirole lightweight guided missile system; additional sensors such as a new driver vision system; and improved C4I architecture. The new panoramic and driver vision system heralds the end of the periscope era. For the first time, the entire crew will be able to ‘see through’ the armour, both day and night. The fusion mode combines daylight vision with high-performance thermal imaging, enabling swift detection of concealed targets around the clock. The Puma is the first significant Western combat vehicle to include a system like this as a standard feature.

Now that the Puma IFV has been declared fit to fight, the German Army’s Mechanised Infantry Corps finds itself on the threshold of a new era, with the prospect of the remaining battalions also being equipped with a comparable revamped version of the Puma.

Embodying a systemic approach to re-equipping vehicle platforms and soldier systems, System Panzergrenadier forms a sound foundation for conceptualising and kitting out larger coherent systems of systems. Looking ahead, System Panzergrenadier thus becomes the basis for digitally networked and directed formations. Given the substantial increase in experience and capabilities in the field of IT system integration, this path provides a powerful impetus for future projects. In the consortium co-founded with PSM GmbH, Rheinmetall Electronics GmbH is responsible for the command capabilities workshare, and thus for assuring cross-platform networking of the system of systems.

Furthermore, System Panzergrenadier is stimulating further development beyond the immediate project. The next generation of the IdZ-ES is already in the starting blocks, while the new Puma VJTF infantry fighting vehicle offers an excellent point of departure for expanded capabilities, e.g., in the sensor-to-shooter category. System Panzergrenadier is a technological trailblazer whose continued development is poised to deliver new capabilities for the German Army’s Division 2027 and Digitised Land-Based Operations system, the D-LBO.