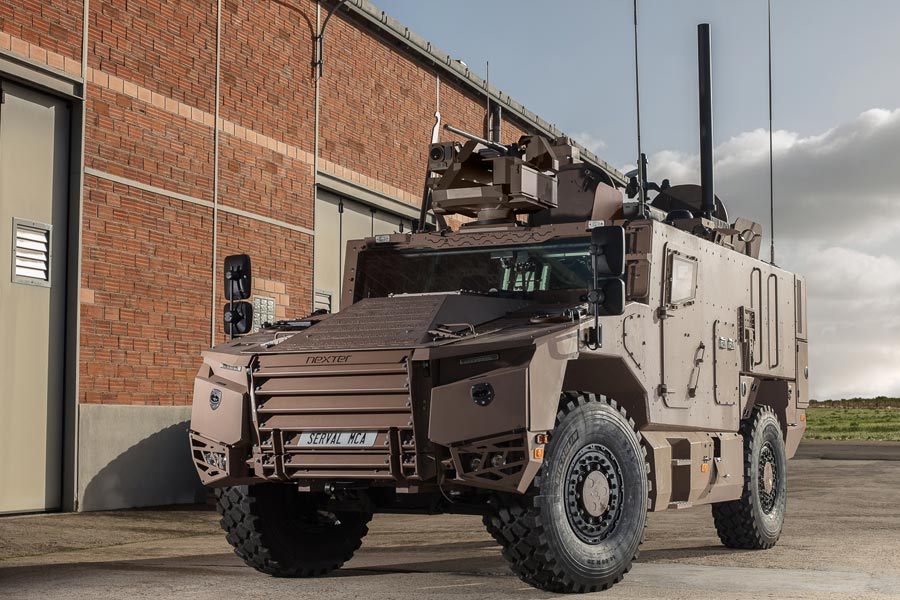 Nexter and Texelis have been notified of the first SERVAL VBMR series production tranches totalling 108 vehicles out of a projected 344.

Joint Press Release, 15 January 2021: Nexter and Texelis, as part of the temporary grouping of companies (GME) light-VBMR (Leger–Véhicule Blindé Multi-Rôles) SERVAL, were notified on December 23, 2020 by the French Delegation for Armaments (DGA) of the first production tranches of the SERVAL contract, i.e. 364 vehicles. This notification provides for the delivery in 2022 of the first 12 production vehicles in the first half of the year, followed by a further 96 in the second half.

The SERVAL is a 15-ton multi-role armoured vehicle which integrates various equipment common to other SCORPION vehicles, especially the electronic core, a turret remotely operated from the passenger compartment, threat sensors and the SCORPION Combat Information System (SICS), which enables it to be integrated into the SCORPION systems network. Based on a modular architecture, Nexter and Texelis have developed three main versions of this weapon system (Patrol, Intelligence and Reconnaissance, and Communications Relay), themselves available in numerous variants. Designed to operate in combat zones, the SERVAL combines flexibility, strategic mobility and payload carrying capacity. It is the indispensable complement to the heavy multi-role armoured vehicle GRIFFON (EBMR) and the armoured reconnaissance and combat vehicle JAGUAR (EBRC) that will equip the land task force’s armoured middle segment. In addition, as part of a procedure launched by the gendarmerie to renew its fleet of armoured vehicles, the GME offers a system based on the SERVAL that integrates a motorised protection solution capable of operating in mainland France and overseas.

Despite the difficulties caused by the health crisis, Nexter and Texelis have managed, on a very tight schedule, to develop a highly protected and particularly mobile combat vehicle. While waiting for the first deliveries, SERVAL’s qualification process is continuing with around ten prototypes currently undergoing qualification tests.

Nexter and Texelis welcome this notification and testify to the involvement of the GME SERVAL teams, who work tirelessly to ensure the satisfaction of end users.