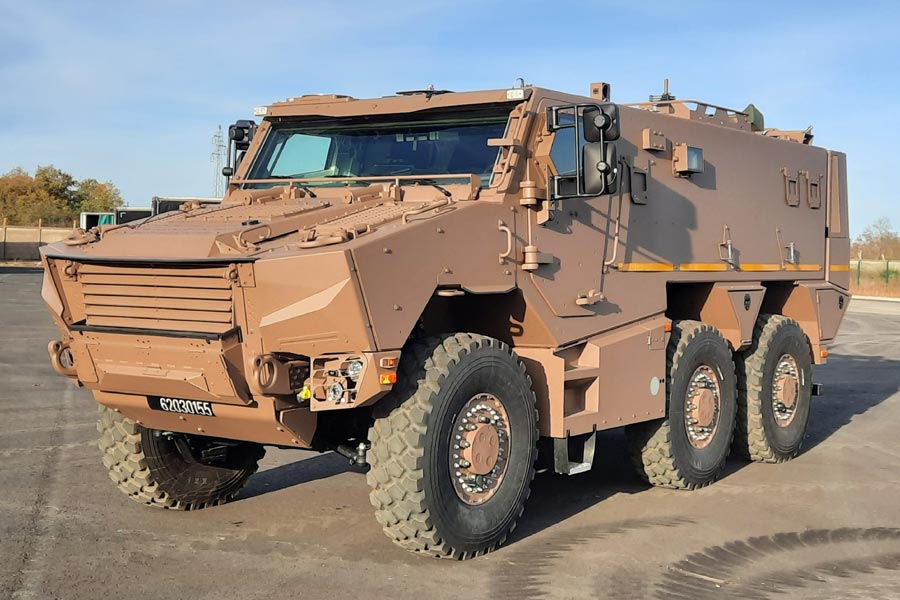 Nexter, Thales and Arquus have succeeded in presenting the 128th GRIFFON for 2020 to the French Delegation for Armaments as planned.

Joint Press Release, 23 December 2020: On December 18, 2020, Nexter, Thales and Arquus, as part of the temporary grouping of companies (GME) EBMR (Engins Blindés Multi-Rôles), presented the 128th GRIFFON planned for 2020 to the French Delegation for Armaments (DGA). Under the terms of the SCORPION program, and despite an unprecedented health crisis that profoundly affected production, the three manufacturers were able to take the challenge and meet their contractual objectives.

After this step, the last GRIFFONs will have to be submitted to the verification operations carried out by the DGA’s quality department. The vehicles will then be transported to the Canjuers site where the Army will proceed to take them into account; it is then that the DGA will formally receive them. To date, 90 GRIFFON have completed this route, adding to the 92 GRIFFON delivered in 2019. From January 2021, the last vehicles that left the production line in December will join them in the regiments, catching up very early in 2021 with the delay due to the health crisis.

From March 2020, COVID-19 has indeed strongly disrupted the industrial organisation of the programme. The site of Roanne, where the GRIFFON and JAGUAR are assembled, was forced to suspend its activity from March 20 to 30 in order to allow the installation of a structure adapted to the resumption of the activity under maximum safety conditions. Since then, two teams have been working on the lines in shifts of eight consecutive hours (2×8) to ensure that the lines are operational during these 16-hour days. Closely linked to their government contacts and after consulting their suppliers, the members of the GME quickly reviewed the initial schedule: the 2020 objectives were maintained for GRIFFON; the first deliveries of JAGUAR were postponed to April 2021; and this, while preserving the amount of deliveries at the end of 2021.

The year 2020 was marked by the passage of several major milestones for the GME. In September, the DGA notified the third conditional tranche of the EBMR contract, enabling the second batch of vehicles (271 GRIFFON and 42 JAGUAR by 2023) to go into production. In November, the GRIFFON command post vehicle (EPC) was qualified. Thus, among the 128 GRIFFONs of 2020, 35 examples of this new variant were presented to the administration, an additional difficulty that the EPC teams overcame. Finally, the new-generation T1 remotely operated turret that will arm the GRIFFONs was also qualified by the DGA.

Nexter, Arquus and Thales would like to pay tribute to the exceptional commitment of their teams. Their sense of duty and creativity have enabled them to meet the expectations of the French Army and its combatants as best they could, while greatly limiting the impact of the health crisis.