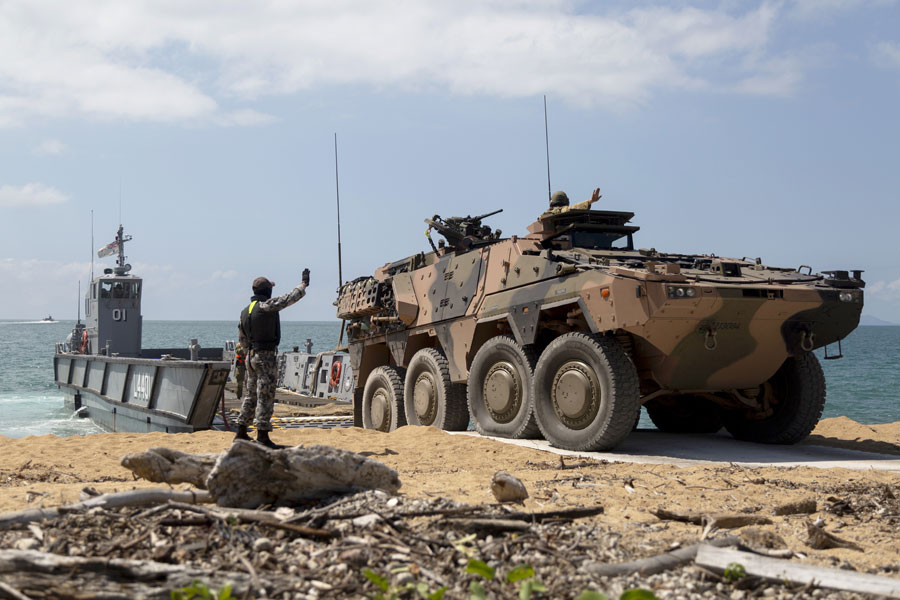 The amphibious landing capability of the new Australian Army Boxer CRV was recently demonstrated during Exercise SEA WADER 2020 in Queensland.

This exercise – which “included the integration of land and maritime projects that will ultimately provide the Australian Defence Force (ADF) with world-class amphibious and force projection capabilities” – enabled newly qualified Boxer CRV crews from the 2nd/14th Light Horse Regiment to practise operating in a coastal setting and increase their amphibious capability. The Boxer completed a series of beach training scenarios, including driving over sand, vehicle recoveries, embarking and disembarking from LCM-8 landing craft and transiting to and from Royal Australian Navy ship HMAS Adelaide, a Canberra-class LHD (Landing Helicopter Dock).

Exercise Director and Commander Landing Forces, Colonel Kim Gilfillan, is quoted as saying: “The integration of new ADF land vehicles with the Landing Helicopter Dock Adelaide provides a step-up in our amphibious force projection capabilities and our capacity to meet the challenges of increased strategic competition.

“In addition to the integration of new capabilities, the joint training will ensure the AAF is well positioned to respond to a range of contingencies, and in particular to provide support to Australia and our regional partners ahead of the 2020-21 high-risk weather season.”

Operational test director for the vehicle embarkation trials, Commander Tim Watson, said the aim of the exercise was to test and evaluate the vehicles in a real-world environment. “We are aiming to validate that the vehicles can operate in their intended conditions.

“This also provides an opportunity for Navy and Army personnel to work together and test our interoperability in a variety of conditions.”

[all images © Commonwealth of Australia, Department of Defence]