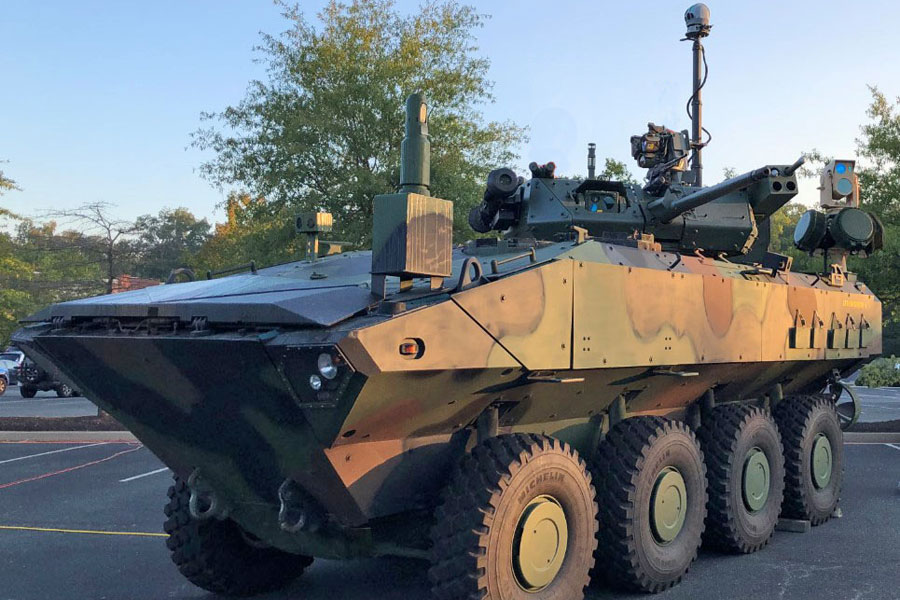 In June 2018 the US Marine Corps awarded BAE Systems a contract to deliver an initial batch of 30 Amphibious Combat Vehicles, with options for up to 204 vehicles in total.

Intended to eventually replace the tracked Amphibious Assault Vehicle (not the LAV-25) used by the USMC, the ACV is an 8×8 wheeled vehicle based on the Iveco SuperAV. This May KONGSBERG Defence & Aerospace announced that BAE Systems had selected their unmanned MCT-30 30mm Medium Calibre Turret for up to 150 of the ACV fleet. The vehicle in the lead photo has this turret, which has an Arnold Defense FLETCHER quadruple 2.75” anti-armour rocket launcher mounted on the left side and an FGM-148 Javelin anti-armour missile launcher on the right. The ACV also sports a Counter-UAV system.

As no formal press release had been issued, we asked BAE Systems to comment on the recent photo and last night a company spokesperson informed us:-

“The technology demonstrator displayed on our Twitter account was intended to be shown at this year’s Modern Day Marine. Due to COVID-19, Modern Day Marine switched to a virtual environment and made that very difficult. Instead, BAE Systems demonstrated the vehicle at a few company locations.

“BAE Systems is currently working on design and development for the ACV-30 and command and control (ACV-C) variants, and a Recovery variant is planned for the future Amphibious Combat Vehicle Family of Vehicles (ACV FOV). The technology demonstrator was upgraded to show the breadth and depth of possibilities for additional variants including counter-UAS and anti-air, anti-armour, missile carriers, logistics, electronic warfare and reconnaissance.”