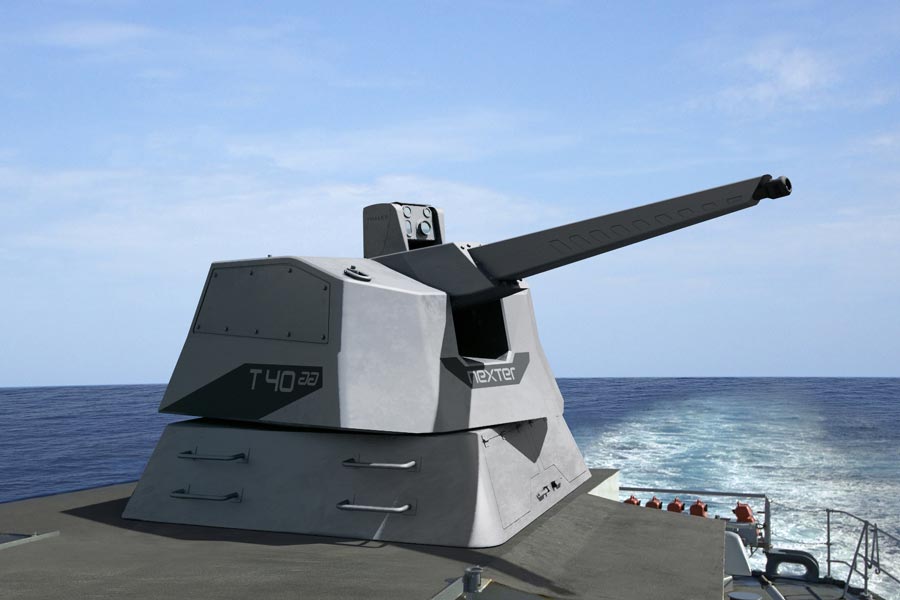 Press Release, 27 October 2020: October 27th 2020: The RAPIDFire system developed by the consortium formed by Thales and Nexter has been chosen by the French defence procurement agency (DGA) to equip future French Navy vessels with new artillery. This new system will provide the Navy’s surface vessels with an effective close-in defence capability against modern air and surface threats.

Naval forces are exposed to several threats with complex behaviours, such as unmanned air and surface vehicles, light aircraft and missiles. RAPIDFire leverages the combined expertise of Thales and Nexter to meet the very short-range defence requirements of the armed forces. The solution features a latest-generation multi-threat (air and surface), multi-environment (land and naval) gun system, with a cost of engagement commensurate with the value of the threats.

RAPIDFire is a gun system that offers high precision thanks to its optronic fire control system integrated onto the turret, its advanced algorithms, powerful gun and automatic ammunition management system allowing the best reactivity and efficiency for the operator. RAPIDFire incorporates the new reference medium calibre 40mm gun developed by CTAI, the international subsidiary of Nexter Systems and BAE Systems, which equipped new armoured vehicles in France, UK and Belgium. The system is compatible with the full range of ammunitions developed for land forces programmes and is predisposed to the use of future ammunition as the smart Anti Aerial Airburst (A3B) round.

Nexter and Thales formed a temporary consortium for RAPIDFire as part of a work programme and roadmap put in place 10 years ago. The programme is currently in the development phase. When development is complete, the weapon systems will enter production, and the first delivery is scheduled for 2022. Developed in a surface-to-air approach allowing use at sea but also from land, the project also provides an option to prepare for future use on land carriers. RAPIDFire, a true joint solution, will thus be a gun system capable of equipping naval, land and air forces.

“We’re delighted to be supporting the French Navy as it enhances the self-defence capabilities of its warships. With its combination of fast-into-action time and firing accuracy, RAPIDFire, developed in cooperation with Nexter, provides the best response for protecting Navy vessels against modern threats. It has the potential to become a key component of our offering of advanced force protection solutions.” Thomas Got, Vice-President Integrated Airspace-protection Systems, Thales.

“The 40 CTA has unrivalled power and compactness, making it a gun system that is particularly suitable for protecting surface vessels. With RAPIDFire, Nexter is delighted to extend the CTA40’s range of use in cooperation with Thales and the French Navy.” Michel Vatrey, Systems and Programmes Director, Nexter.