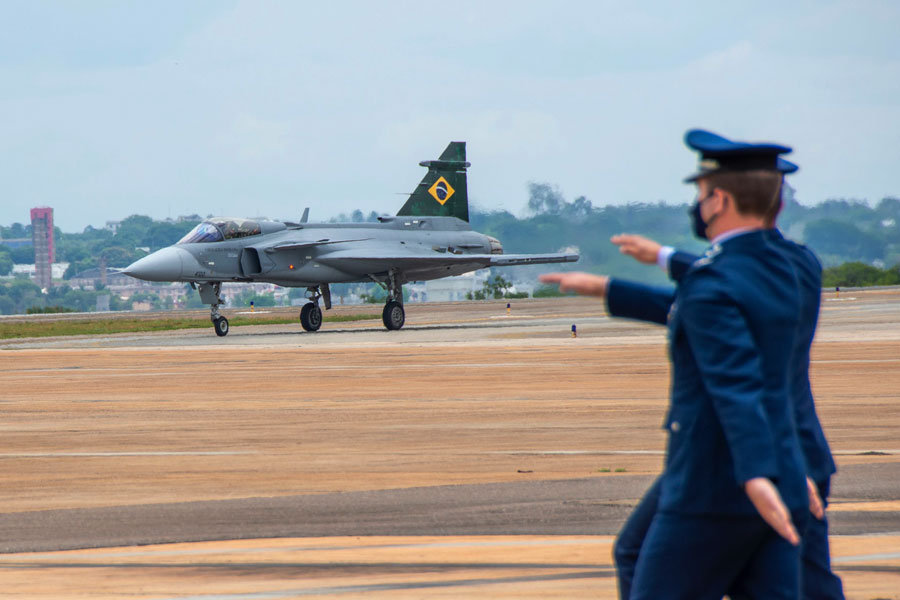 The Gripen E, named F-39E Gripen by the Brazilian Air Force, was officially presented during celebrations today in Brasília.

“It is a great honour to see Gripen E at the ceremony in celebration to the Aviators’ Day and the Brazilian Air Force Day. I do not believe that there is a more appropriate occasion for this presentation, as it certainly means a lot to all Brazilian aviators to have the aircraft flying in the skies of Brazil”, stated Micael Johansson, CEO and President of Saab. “This is the result of a successful collaboration between Brazil and Sweden, and a great opportunity to further strengthen ties between the two countries”.

Lieutenant Brigadier Bermudez pointed out that the new fighter is soon ready to begin the operation by the FAB. “The development and manufacture of the smart fighter has also been closely monitored by members of the Brazilian Air Force and involves professionals from several national companies. Therefore the 23rd of October is even more special this year, as we have the official presentation of the first F-39 Gripen that arrived in Brazil”.

The aircraft arrived in Brazil on September 20 and three days later made its first flight in the country, from Navegantes (Santa Catarina State) to Gavião Peixoto (São Paulo State), to continue the flight test programme. In Brazil, the activities include tests on flight control and climate control systems, as well as tests on the aircraft in tropical climatic conditions. In addition to the tests that are common to a Gripen E programme aircraft, unique characteristics of the Brazilian aircraft will be also tested, such as armaments integration and the Link BR2 communication system – which provides encrypted data and voice communication to the aircraft.

The first fighters will be delivered to the Brazilian Air Force, at Wing 2, in Anápolis (Goiás State), at the end of 2021.

The Brazilian Gripen Programme: The partnership with Brazil began in 2014, with the signing of the contract for the development and production of 36 Gripen E/F aircraft for the Brazilian Air Force, including systems, support and equipment. An extensive technology transfer programme, which takes place over a ten year period, is already promoting the development of the local aviation industry through partner companies participating in the Brazilian Gripen Programme.

During this period, more than 350 Brazilian technicians and engineers will also participate in theoretical and practical training in Sweden in order to acquire the necessary knowledge to perform the same tasks in Brazil. So far, more than 230 professionals have completed the training and most of them are back in Brazil, working at the Gripen Design and Development Center (GDDN).

The Gripen E/F fighters that will be delivered to the Brazilian Air Force will be developed and produced in collaboration with the Brazilian technicians and engineers. From 2021 onwards, the complete assembly of 15 aircraft will begin locally. The development of the two-seat Gripen F is advancing with numerous activities at the GDDN.