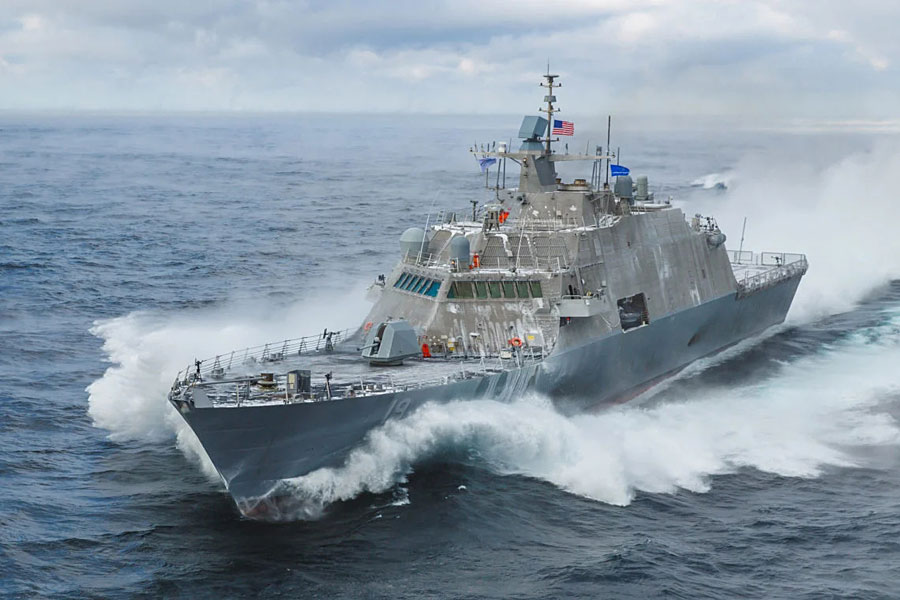 “Nearly 200 years after the first ship to bear the name was launched, today we commission the seventh USS St. Louis,” said Secretary of the Navy Kenneth J. Braithwaite. “Much like that sloop of war did in 1828, LCS-19 and her crew will protect the US and our interests near and abroad. Whether conducting counter-narcotic operations in the Caribbean or working to enhance interoperability with partners and allies at sea, USS St. Louis will provide manoeuvrability, stability and lethality in today’s era of Great Power Competition.”

Rear Adm. Brad Cooper II, commander, Naval Surface Force Atlantic, welcomed the ship that brings capabilities to counter diesel submarine, mines, and fast surface craft threats to the world’s premier surface force. “St. Louis brings speed and agility to the fleet,” said Cooper. “Congratulations to St. Louis’ captain and crew for all of your hard work to reach this milestone. You join a proud Surface Force that controls the seas and provides the nation with naval combat power when and where needed.”

Barbara Broadhurst Taylor, the ship’s sponsor, offered congratulations to everyone who played a role in delivering USS St. Louis to service. “To witness the skill and commitment of the officers and crew of USS St Louis as they brought our magnificent ship to life has been one of the greatest honours of my life. All of us in the great city of St. Louis are proud to be part of our ship’s historic legacy, and extend our appreciation and lasting friendship to the crew and their families,” Taylor said. “Your patriotism and dedication to preserving peace and freedom inspires us. May God bless our ship and all who sail her.”

Assistant Secretary of the Navy for Energy, Installations, and Environment Charles Williams expressed gratitude to the ships sponsor for their commitment to the Navy. “I want to express the Navy’s deep appreciation to the Taylor family. Much of what they do is anonymous but believe me when I say they are the pre-eminent philanthropic family of the St. Louis community and a donor to Navy causes,” said Williams

St. Louis’ commanding officer, Cmdr. Kevin Hagan, reported the ship ready. “I’m incredibly proud of the work the crew of St. Louis put in to get this ship ready to sail. I am absolutely honoured to lead this crew through all of the trials required of a brand new ship in the fleet,” said Hagan. “Their perseverance and dedication will set the foundation for our crew and for all future crews that will call USS St. Louis their home.”

St. Louis is the 22nd LCS to be delivered to the Navy, and the tenth of the Freedom-variant to join the fleet and is the seventh ship to bear the name. The first St. Louis, a sloop of war, was launched in 1828. It spent the majority of its service patrolling the coasts of the Americas to secure interests and trade. In addition, it served as the flagship for the West Indies Squadron working to suppress piracy in the Caribbean Sea, the Antilles and the Gulf of Mexico region.

The Littoral Combat Ship is a fast, agile and networked surface combatant, and the primary mission for the LCS includes countering diesel submarine threats, littoral mine threats and surface threats to assure maritime access for joint forces. The underlying strength of the LCS lies in its innovative design approach, applying modularity for operational flexibility. Fundamental to this approach is the capability to rapidly install interchangeable mission packages (MPs) onto the seaframe to fulfil a specific mission and then be uninstalled, maintained and upgraded at the Mission Package Support Facility (MPSF) for future use aboard any LCS seaframe.

LCS may also pair with the MH-60R advanced maritime helicopter giving it a robust anti-submarine mission capability that is fully interoperable with the US Navy and its coalition partners. Primary missions of the MH-60R include anti-submarine warfare, anti-surface warfare, surveillance, communications relay, combat search and rescue, naval gunfire support and logistics support.

*This page has been updated – the original US DoD version incorrectly referred to USS St. Louis as being an Independence-variant LCS.