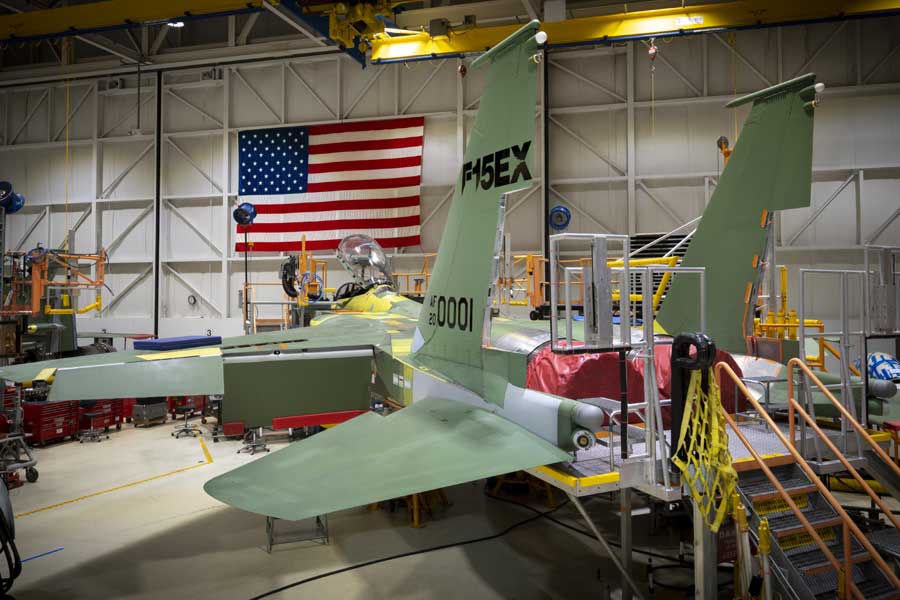 The US Department of the Air Force has awarded Boeing a nearly $1.2 billion contract for its first lot of eight F-15EX fighter aircraft.

News Release, Washington, 13 July 2020: The Department of the Air Force has awarded a nearly $1.2 billion contract for its first lot of eight F-15EX fighter aircraft.

The contract, awarded to Boeing, provides for the design, development, integration, manufacturing, test, verification, certification, delivery, sustainment and modification of F-15EX aircraft, including spares, support equipment, training materials, technical data and technical support. The F-15EX will replace the oldest F-15C/Ds in the service’s inventory. Eight F-15EX aircraft were approved in the fiscal year 2020 budget and 12 were requested in the FY21 budget. The Air Force plans to purchase a total of 76 F-15EX aircraft over the five-year Future Years Defense Program.

“The F-15EX is the most affordable and immediate way to refresh the capacity and update the capabilities provided by our ageing F-15C/D fleets,” said Gen. Mike Holmes, commander of Air Combat Command. “The F-15EX is ready to fight as soon as it comes off the line.”

The F-15EX is a two-seat fighter with US-only capabilities. It features a deep magazine that can carry a load of advanced weapons. The platform also requires minimal transitional training or additional manpower and little to no infrastructure changes, ensuring the continuation of the mission.

“When delivered, we expect bases currently operating the F-15 to transition to the new EX platform in a matter of months versus years,” Holmes said.

The most significant difference between the F-15EX and legacy F-15s lies in its Open Mission Systems (OMS) architecture. The OMS architecture will enable the rapid insertion of the latest aircraft technologies. The F-15EX will also have fly-by-wire flight controls, a new electronic warfare system, advanced cockpit systems, and the latest mission systems and software capabilities available for legacy F-15s.

“The F-15EX’s digital backbone, open mission systems, and generous payload capacity fit well with our vision for future net-enabled warfare,” said Dr. Will Roper, assistant secretary of the Air Force for Acquisition, Technology and Logistics. “Continually upgrading systems, and how they share data across the Joint Force, is critical for defeating advanced threats. F-15EX is designed to evolve from day one.”

The first eight F-15EX aircraft will be fielded at Eglin Air Force Base, Florida, to support testing efforts. The delivery of the first two aircraft is scheduled for the second quarter of FY21. The remaining six aircraft are scheduled to deliver in FY23. The Air Force is using the Strategic Basing Process to determine the fielding locations for subsequent aircraft lots.

Press Release, St. Louis, 13 July 2020: The US Air Force awarded Boeing a nearly $1.2 billion contract to build the first lot of eight F-15EX advanced fighter jets to help the service meet its capacity requirements and add capability to its fighter fleet. The award also covers support and one-time, upfront engineering costs. Already under construction at the Boeing F-15 production facility in St. Louis, the first two jets deliver next year. The US Air Force is also announcing the overall Indefinite Delivery Indefinite Quantity contract with a ceiling value of nearly $23 billion for F-15EX.

“The F-15EX is the most advanced version of the F-15 ever built, due in large part to its digital backbone,” said Lori Schneider, Boeing F-15EX programme manager. “Its unmatched range, price and best-in-class payload capacity make the F-15EX an attractive choice for the US Air Force.”

The F-15EX carries more weapons than any other fighter in its class, and can launch hypersonic weapons up to 22 feet long and weighing up to 7,000 pounds. To further support the digital airframe and advance rapid technology insertion, the F-15 programme serves as a pathfinder for the Department of Defense’s DevSecOps initiative, aimed at developing secure, flexible and agile software. Additionally, open mission systems architecture ensures its viability for decades.

“F-15EX brings together benefits of digital engineering, open mission systems and agile software development to keep it affordable and upgradable for decades to come,” said Prat Kumar, Boeing vice president and F-15 programme manager. “This means we can rapidly test and field new capabilities on F-15EX keeping our warfighters ahead of threats.”

Pilots and mechanics currently operating the F-15 anticipate transitioning to the F-15EX in a matter of days as opposed to years. Future plans call for as many as 144 aircraft.

“We listened to our customer every step of the way when developing this exciting jet,” said Kumar. “What we will soon deliver is a modern and robust aircraft that supports our nation’s defence by incorporating the latest systems, sensors and weapons.”

Boeing, F-15EX, F-15EX fighter, Featured, US Air Force
You may also like