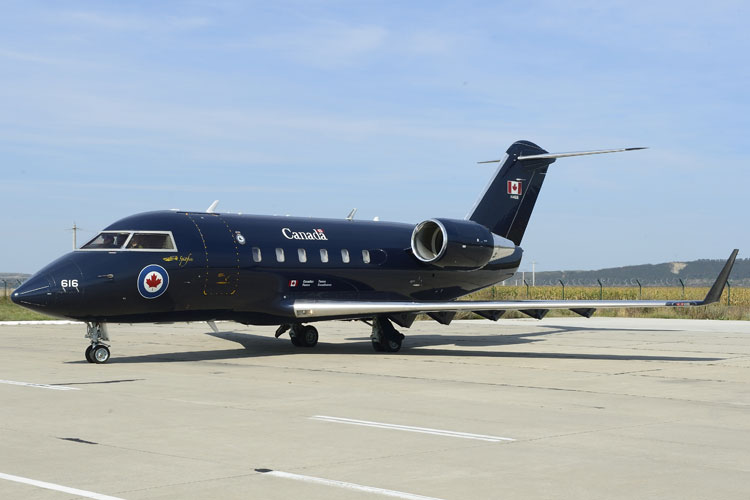 An RCAF CC-144 Challenger prepares for take off after a crew exchange on September 1, 2014 during Operation REASSURANCE [©CDND: Cpl Jean Archambault]

News Release, Ottawa, 06 June 2020: The Government of Canada today announced it is replacing two Challenger model 601 utility aircraft with two Challenger model 650s for the Canadian Armed Forces to allow for continuation of mission critical roles. The retiring aircraft that entered service in the 1980s, fall short of operational requirements and are nearly obsolete due to new rules in the United States & Europe that will restrict their ability to fly internationally before the end of this year.

The replacement ensures CAF can continue to operate a modern and flexible utility flight service fleet that serves a variety of roles – including reconnaissance and liaison missions with international partners, and the speedy deployment of specialized capabilities and expertise, including the Disaster Assistance Response Team.

Without this needed replacement, the Royal Canadian Air Force’s operational effectiveness for missions would be limited. The aircraft are used for the medical evacuation of military personnel serving overseas and the safe transport of CAF medical personnel and specialized equipment in the critical first few hours and days of someone being wounded. They are also used for the safe extraction and repatriation of personnel and citizens. The fleet further provides the ability to transport specialized teams from Canada to operational theatres around the world. Earlier this month, a Challenger quickly brought Royal Canadian Navy search experts to Naples, Italy, to support the search for the Cyclone helicopter lost in the Ionian Sea.

This fleet provides critical abilities here at home. It has been used in our whole-of-government effort to support our Northern, Indigenous and remote communities during COVID-19. In May 2020, it supported the delivery of COVID-19 testing supplies to Nunavut. The aircraft have been at the ready to help our provincial and territorial partners with medical evacuations, if required. This fleet is also critical in facilitating the travel of senior government officials, as well as Parliamentarians from all parties due to security and safety considerations.

The CAF’s existing Challenger fleet consists of four aircraft, two purchased in the early 1980s and two purchased in the early 2000s. With the implementation of new international regulatory and interoperability requirements in 2020, only half of the fleet is fully compliant with international standards. That is why the Department of National Defence has been working on this consolidation initiative since 2018, and why the Government entered into a contract with the company this week, after negotiating the most cost-effective option for these capabilities, which were accounted and paid with existing funds in SSE’s fiscal framework.

The Challenger 650 aircraft is the current production version of the model that the CAF currently operates. This commonality will result in significant benefits in efficiency, cost, and interoperability, both in terms of training and support to operations.

“This purchase is another example of our government’s commitment to provide the Canadian Armed Forces with the modern equipment they need to carry out the critical work we ask of them. This fleet is a crucial operational capability and ensuring its continuity is another important investment in our women and men in uniform.” The Honourable Harjit S. Sajjan, Minister of National Defence.

“While helping to fulfil the Royal Canadian Air Force’s (RCAF) operational requirements, this purchase also demonstrates our commitment to Canada’s world-class aerospace industry. Having this ready, off-the-shelf option also offers long-term value to the RCAF and to Canada.” The Honourable Anita Anand, Minister of Public Services and Procurement Canada.