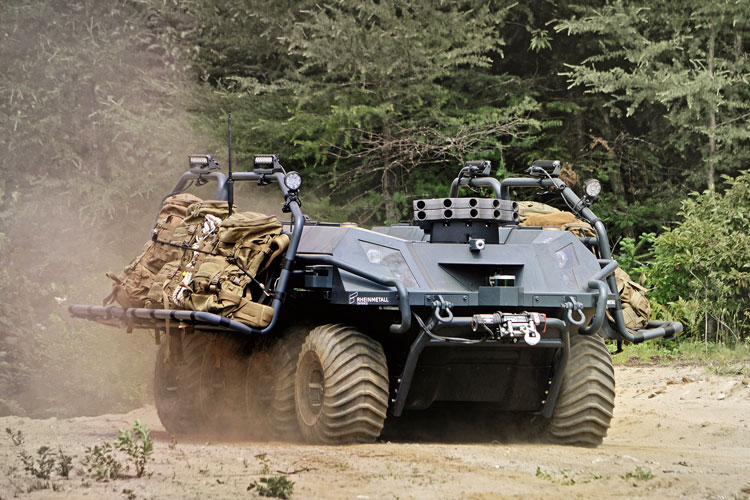 Configured for transporting cargo, these Unmanned Ground Vehicles will form part of the United Kingdom’s Robotic Platoon Vehicle programme. This programme is designed to determine the extent to which unmanned vehicles can boost the combat effectiveness and capabilities of dismounted troops at platoon level. The four Mission Master – Cargo vehicles will be delivered throughout the spring of 2020. In addition, the scope of supply comprises two stretcher systems that can be integrated into the cargo vehicle in just 60 seconds. The order, which was placed at the end of 2019, also includes training and service support, as well as spare parts. The vehicles will be supplied by Rheinmetall Canada, with Rheinmetall BAE Land Systems providing on-location support services in its capacity as cooperation partner.

Robotics is already changing the modern battlefield. A modular Unmanned Ground Vehicle (UGV), Rheinmetall’s new Mission Master enhances the combat performance of soldiers deployed on the ground in numerous ways. The Mission Master’s artificial intelligence and robotic brawn mean that it can execute a multitude of dull, dirty, and dangerous tasks that troops would otherwise have to perform themselves, letting them get on with the most important thing of all: their core mission. The Mission Master – Cargo system reduces the combat load soldiers have to carry, boosting their mobility and efficiency. Its flexible stowage concept and robust design let the Mission Master – Cargo shoulder a payload of up to half a ton of supplies, tactical kit, or medical equipment.

Ready for action, the Mission Master can operate in autonomous or semi-autonomous mode as a fully-fledged member of the combat team. The Mission Master platform is designed for maximum flexibility, and can be readily adapted for a wide variety of different missions thanks to modular build-ons specially engineered for quick installation. Potential applications include surveillance, protection, evacuation of casualties, firefighting, and CBRN reconnaissance and detection. It can also serve as a mobile radio relay station.