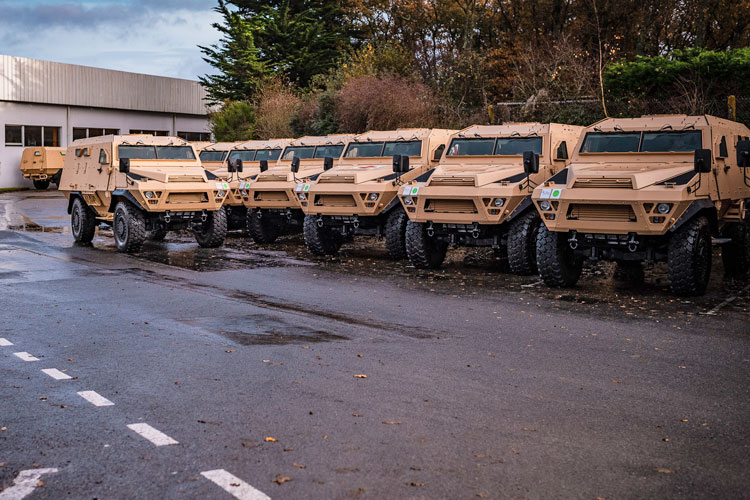 French manufacturer ARQUUS today announces the production of the 500th BASTION and the introduction of a new four-cylinder, 270hp engine option.

Press Release, 23 March 2020: After a very active year 2019, during which the factory has produced more than 1,350 vehicles, among which 1,200 VT4 liaison vehicles for the French Army, ARQUUS Saint-Nazaire has recently announced having reached the mark of 500 BASTION produced.

This industrial achievement, which is a tribute to the BASTION, also crowns the VLRA, a revolutionary and historical vehicle. That performance also highlights the key role of the BASTION, notably in Africa, where it constitutes the backbone of numerous armies. To better meet its partners’ needs, ARQUUS keeps upgrading the BASTION and offers it in 2020 in a new version, fitted with a 270hp engine. It is a major milestone for the ARQUUS factory in Saint-Nazaire, which has been writing its history with the legendary VLRA (Véhicule Léger de Reconnaissance et d’Appui – Liaison, Reconnaissance and Support Vehicle), and keeps writing it with the new VLRA and the BASTION.

To answer its clients’ specific demands, which requested a robust and highly mobile armoured vehicle, ARQUUS has developed in 2012 the BASTION, now one of the most renowned vehicles of the African theatres. By fitting a mecano-welded hull on the new VLRA’s chassis, ARQUUS has created a simple, robust, and hardy solution, ready to industrialise, easy to support and offering a wide commonality with all existing VLRA fleets all over the world. Well protected against ballistic and mine threats, the BASTION can host a full 8-soldier combat group, as well as comprehensive equipment thanks to its large internal volume. Already in service in several African armies, where it is renowned for its simplicity of use and ruggedness, as well as for its versatility, the BASTION has recently been chosen by the G5 Sahel to equip some of its members’ armies in their fight against armed terrorist groups. Taking into account these latest orders, the BASTION reaches 500 units currently in service worldwide, and asserts itself as the armoured vehicle of choice for the African theatres.

As part of the evolution of ARQUUS’ range, the BASTION is now offered in a new version, with a four-cylinder, 270hp engine. This power increase grants the BASTION with new capabilities in terms of speed and obstacle crossing, thus upgrading its performance on all theatres of operations. This new version complements the classic 180hp version. It illustrates ARQUUS’ ability to optimise its vehicles’ performance, depending on the armies’ needs and the feedback from the field.

At the BASTION’s origins, and at the heart of ARQUUS Saint-Nazaire’s history, as heir to ACMAT (Ateliers de Construction Mécanique de l’Atlantique), lies the legendary VLRA. Born of the Legueu methods, the VLRA has been equipping the armies since 1967, starting with the Légion Etrangère and the Troupes de Marine (Navy Troops, part of the French Army), but also with the French Special Forces. True mechanical dromedary, the VLRA has built over the years a unique reputation for obstacle crossing. With its autonomy of 1,400 kilometres, its water tank and its endurance, the VLRA is the mount of choice for great raids and exceptional expeditions, the true heir to the Long Range Desert Patrols.

After more than fifty years of good and faithful service, more than 600 VLRAs are still in service in the Army, in more than 75 different versions, which prove the vehicle’s endurance and high versatility. In its command car version, the VLRA is notably used by the French President on the French National Day. A new VLRA version has been presented by ARQUUS in 2009. This version increases the payload by more than one tonne, optimises the cabin ergonomics, thus creating a third forward seat, and reduces the turning radius. The BASTION is built on this version’s chassis. In total, more than 1,000 chassis have been produced by ARQUUS for the new VLRA or the BASTION since 2009.