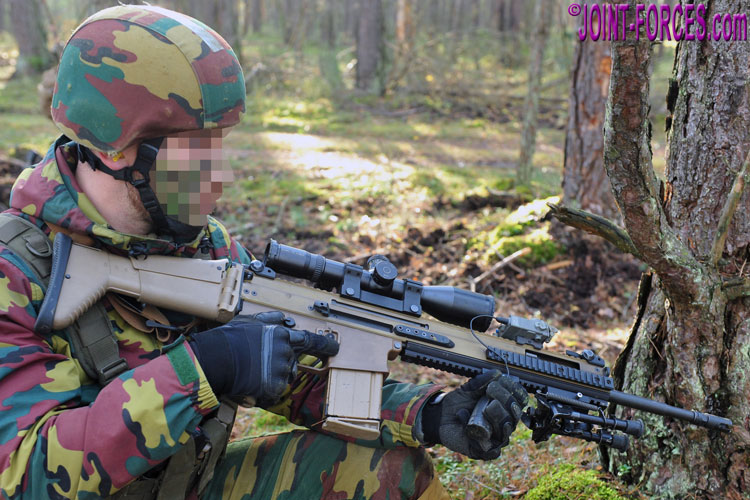 The 7.62mm SCAR-H PR precision rifle, chosen by France and already in use with Belgian Forces, features a 20” long barrel [©Carl Schulze]

It has recently been announced that the French Ministry of the Armed Forces has selected the FN SCAR-H PR as the new French military precision rifle.

Press Release, 06 January 2020: [auto-translation] Florence Parly, Minister of the Armed Forces, welcomes the notification by the General Directorate of Armament (DGA), on December 13, 2019, of a procurement contract for 2,620 semi-automatic sniper rifles (FPSA) of the SCAR type (Special Combat Assault Rifle). The first deliveries will take place in 2020.

Designed by a group of manufacturers (OIP Sensor Systems and Telefunken-Racoms, associated with the armourer FN Herstal and the company MEN), this new rifle will replace weapons in service since the 1980s. It will allow precision shooters to our armed forces to maintain superiority over the adversary, day and night, for shots up to a distance of 800 metres.

The Military Planning Law (LPM) 2019-2025 is placed “at breast height”. Designed to maintain the operational superiority of the French armies, it focuses on improving the equipment and protection of our soldiers, sailors and airmen engaged in theatres of operations. The DGA has chosen the winner of the competitive procedure launched in 2018 to replace the FR-F2 rifle: the group made up of the company OIP Sensor Systems (Optics and Precision Instruments) and the company Telefunken-Racoms (optoelectronics) FN Herstal (weapon and telescope) and MEN (ammunition). These manufacturers will produce the semi-automatic sniper rifle (FPSA) of the SCAR-H PR (Precision Rifle) type. The calibre identical to the FR-F2 (7.62 mm), the FPSA will be equipped with day and night optics.

This market represents a total investment of around 100 million Euros. The 2,620 rifles planned, their accessories and their ammunition will be delivered by 2022. The first deliveries will begin at the beginning of 2020. After a call for applications from French and European companies, the offers were evaluated by the DGA, in close collaboration with the armed forces. Carried out during 2019, the weapons test campaign marked the high point of this competition. It was carried out by engineers and technicians from the DGA Land Techniques and Testing Center in Bourges with the support of soldiers from the Technical Section of the Army (STAT) in Satory.

The adoption of the SCAR-type FPSA marks a new stage in the renewal of the small arms of our armies. Initiated in 2017 by the first deliveries of the HK 416F assault rifle, this program carried by the LPM also provides for the acquisition of new automatic pistols (procedure in progress). The French military will therefore have a range of light weapons among the most efficient in the world.

This rifle is intended to equip the snipers of our armed forces. It will allow them to maintain superiority over the adversaries they face in the theatres of external operations. “Eyes of the section chief”, snipers participate in the protection of their units by carrying out observation, intelligence and neutralization missions of long-range targets. It is a primordial and risky mission. The range of a sniper rifle is approximately 800 metres, compared to 300 for the rifles of other soldiers.