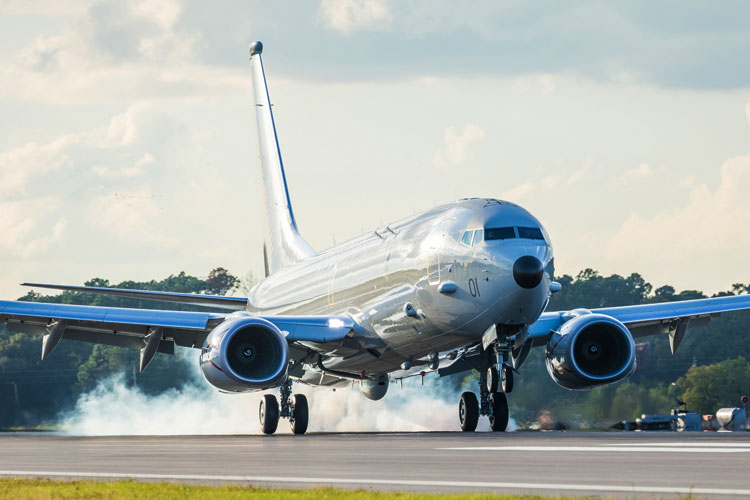 UK MoD Press Release, 31 October 2019: The first submarine-hunting Poseidon MRA1 Maritime Patrol Aircraft (MPA) has been delivered to the Royal Air Force. The MoD is investing £3 billion in nine state-of-the-art jets which will enhance the UK’s tracking of hostile maritime targets, protect the British continuous at-sea nuclear deterrent, and play a central role in NATO missions across the North Atlantic.

“Using the world’s most advanced sensors and operating for long periods, these aircraft will transform the quality of intelligence available to our armed forces and protect our vital nuclear deterrent.”

Following an unveiling ceremony in Seattle, the aircraft was flown to Naval Air Station Jacksonville in Florida where RAF personnel are being trained to operate the aircraft. On arrival Michelle Sanders, DE&S Delivery Team Leader, signed the paperwork to formally transfer the aircraft, named Pride of Moray, to UK ownership.

Air Chief Marshal Mike Wigston, Chief of the Air Staff, said: “Poseidon is a game-changing maritime patrol aircraft, able to detect, track and if necessary destroy the most advanced submarines in the world today.

“With Poseidon MRA1, I am delighted and very proud that the Royal Air Force will once again have a maritime patrol force working alongside the Royal Navy, securing our seas to protect our nation”.

First Sea Lord, Admiral Tony Radakin, said: “Poseidon marks a superb upgrade in the UK’s ability to conduct anti-submarine operations. This will give the UK the ability to conduct long range patrols and integrate seamlessly with our NATO allies to provide a world-leading capability.

“This will maintain operational freedom for our own submarines, and apply pressure to those of our potential foes. I look forward to working with the RAF and our international partners on this superb capability.”

The Poseidon MRA1 is designed to carry out extended surveillance missions at both high and low altitudes. The aircraft is equipped with cutting-edge sensors which uses high-resolution area mapping to find both surface and sub-surface threats. The aircraft can carry up to 129 sonobuoys, small detection devices which are dropped from the aircraft into the sea to search for enemy submarines. The systems survey the battlespace under the surface of the sea and relay acoustic information via radio transmitter back to the aircraft. The aircraft will also be armed with Harpoon anti-surface ship missiles and Mk 54 torpedoes capable of attacking both surface and sub-surface targets.

Michelle Sanders, DE&S Delivery Team Leader, said: “Seeing the first Poseidon MRA1 handed over to the Royal Air Force is an incredibly proud moment for all of the team at DE&S.

“Close, collaborative working with colleagues in Air Capability, the US Navy and industry has helped us deliver this very capable aircraft.”

As leading members of NATO, the UK has signed agreements with both the US and Norwegian militaries to cooperate closely on operating their Poseidon fleets across the North Atlantic. In August this year, Defence Minister Anne Marie-Trevelyan hosted Norwegian State Secretary Tone Skogen at RAF Lossiemouth to deepen the two country’s partnership on the Poseidon programme.

To maintain the skills required to deliver this vital capability, the RAF has embedded aircrew within MPA squadrons in Australia, Canada, New Zealand and the USA. The first aircraft will arrive in Scotland in early 2020, with the fleet to be based at RAF Lossiemouth in Moray. All nine aircraft will be delivered by November 2021. The aircraft will be flown initially by 120 Squadron which was originally stood up on 1 January 1918 and was the leading anti-submarine warfare squadron in WWII. 201 Squadron will also join the programme in due course.

The Poseidon MRA1 programme is bringing significant economic benefits to the communities near RAF Lossiemouth. A total of £460 million is being invested in the station to prepare for the arrival of the new aircraft, including the construction of a £132 million strategic facility for the fleet to be completed next year.

The programme will also bring around 700 additional personnel to Moray, taking the total number of employees there to 2,500.