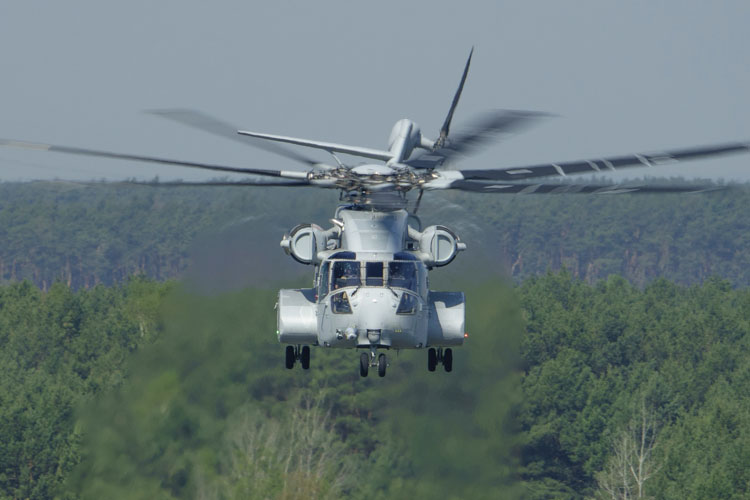 Rheinmetall and Sikorsky have announced plans for construction of a CH-53K Helicopter Logistics and Fleet Management Centre at Leipzig/Halle Airport.

Press Release, 29 October 2019: In order to support Germany’s ‘Schwerer Transport-hubschrauber’ (STH) heavy lift helicopter programme, Sikorsky, a Lockheed Martin company, and Rheinmetall announced today that they intend to set up a logistics and fleet management centre at Leipzig/Halle Airport if the Bundeswehr selects the CH-53K as its next heavy-lift transport helicopter. This will create numerous high-tech jobs and strengthen Leipzig and the local airport as a prime business location in the long term.

“We are in advanced talks on a logistics and project management hub at Leipzig Airport”, said Mike Schmidt, managing director of Rheinmetall Aviation Services GmbH. “We are delighted with the very positive response so far. If the application is successful, the supply of the new Bundeswehr transport helicopter and project management could be carried out centrally and efficiently in Leipzig. Rheinmetall Aviation Services is also considering relocating its headquarters to Leipzig. For the region, the project would mean a settlement of important industry and associated jobs.”

“We have built up a strong industrial team in Germany that will ensure the availability of the CH-53K fleet for the German Air Force,” said Christian Albrecht, business development manager at Sikorsky in Berlin, and a former Chief Operating Officer for maintenance management with the 64th Helicopter Wing of the German Air Force at Holzdorf Air Base. “With our plans for a hub at Leipzig/Halle Airport, we are laying the foundation to provide the Bundeswehr with a helicopter that will be reliable for several decades to come.”

In addition to using existing hangars and storage areas at Leipzig/Halle Airport, the team will establish a fleet management centre where technical helicopter data can be evaluated. The multi-mission CH-53K is the most advanced, intelligent and capable heavy transport helicopter ever built. As such, the helicopter has an Integrated Vehicle Health Monitoring System (IVHMS) that monitors the operation of the entire aircraft, recognises the maintenance requirements of important components and simplifies their maintenance. This will result in much higher readiness rates compared to today´s legacy fleets. In addition, members the project team will be located directly at the airport.

The Bundeswehr is expected to award a contract for its new heavy-lift helicopter in 2021. With the CH-53K, the Bundeswehr will receive a proven helicopter with low life-cycle costs, unparalleled growth potential and no need for costly and time-consuming retrofits in the coming decades.

Featured, Helicopter, Logistics and Fleet Management Centre, Rheinmetall, Sikorsky
You may also like