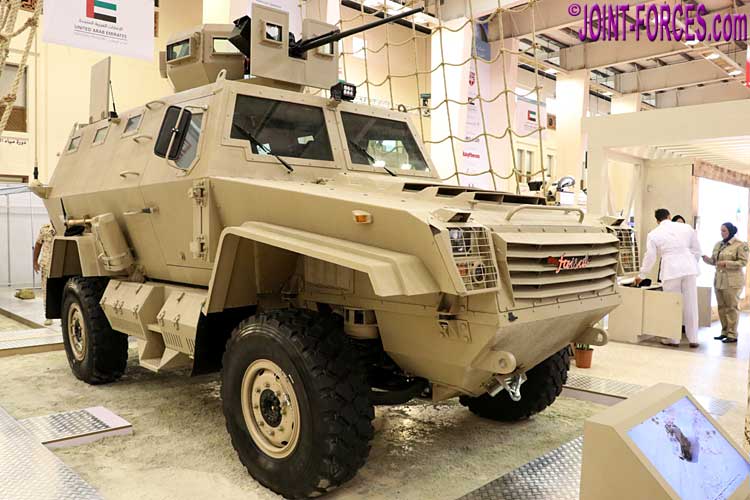 Intended for use over different terrain types as well as having a high road speed, the FAISAL APC has been designed to allow it to be configured as an Internal Security Vehicle, Command & Control Vehicle, Reconnaissance Vehicle or Armoured Ambulance in addition to its primary role as an Infantry Squad Vehicle.

Armoured to B6 protection level, the FAISAL APC has a V-shaped hull and is designed to protect its occupants from 6kg anti-armour mines in addition to bullets and shrapnel. The COTS (commercial-off-the-shelf) driveline and major systems run underneath the monocoque armoured crew module, which can be hinged and propped at 45 degrees for routine maintenance or craned off for major repairs. Standard internal configuration is for driver and commander up front with two soldiers directly behind on rearward-facing seats and four more at the rear on inward-facing seats which can be folded up to allow cargo to be transported. There is an armoured crewed weapon station amidships and two top cover roof hatches at the rear. Standard equipment includes four surveillance cameras, a fire suppression system, self-recovery winch and run-flat tyre inserts.

FAISAL is powered by a 300HP (221kW) Cummins diesel engine through a six-speed automatic transmission, giving a top road speed of 110km/hr. Gross Vehicle Weight is 9,000kg and the effective payload is given as being 2,000kg. Cruising range is quoted as being 900km. Dimensionally, the vehicle measures 5714 x 2630 x 320mm high and has a 3300mm wheelbase. Unprepared fording depth is 1120mm, a 400mm step can be climbed and gradients of 60% can be tackled.

According to the BDF Colonel who commands the Army’s own Vehicle Armouring Workshop which built FAISAL, it has now completed full evaluation trials (a video showing the vehicle tackling on-road and off-road conditions with a full crew was screened at BIDEC 2019) and is ready for full production.