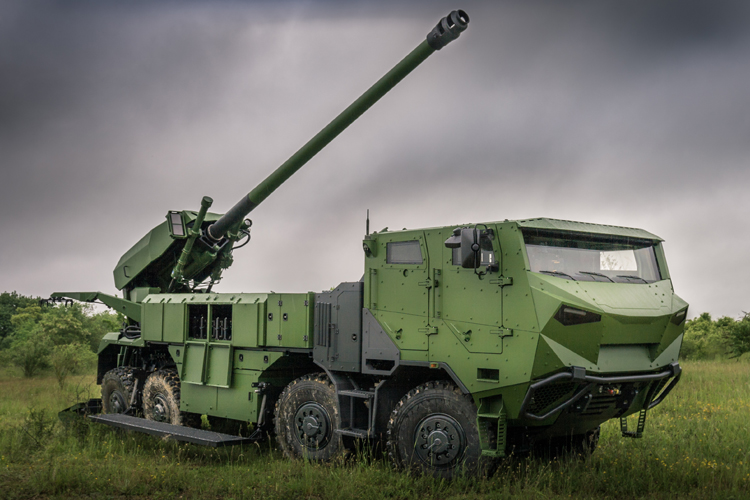 Press Release, Satory, 28 October 2019: – Nexter, a KNDS company, European leader in land defence, announces the signing by the Danish Ministry of Defence Procurement and Logistics Organisation (DALO) of a contract for the delivery of 4 additional CAESAR 8×8.

Highly modular, the CAESAR 8×8 can carry up to 36 complete ammunition as well as a wide range of equipment according to operational needs (secondary weapons, electronic countermeasures, smoke, etc.). Its shielding offers a high level of ballistic and anti-mine protection (level 2A and 2B STANAG 4569) and anti-IED protection. Finally, it has an automatic shell reloading system, whose speed can be configured according to the user’s operating modes (semi-automatic to automatic).

The acquisition of 15 CAESAR 8×8 in 2017: Denmark had already signed a contract with Nexter on 22 May 2017 for the delivery of 15 CAESAR 8×8 systems, which will be delivered mid-2020 to the Danish forces. The strength of Nexter’s offer lies both in the participation in the program of local players such as HYDREMA, WEIBEL or TEN CATE, and in the exceptional performance of CAESAR 8×8, selected on the basis of rigorous evaluations conducted in February 2017. Nexter’s artillery system thus perfectly meets Danish requirements for firepower, crew protection and high mobility.

The acquisition of 4 additional CAESAR 8×8: On October 11, DALO signed a contract with Nexter to acquire 4 additional CAESAR 8×8. It is the result of two years of constant and fruitful exchanges between Danish and Nexter teams. In 2018, DALO had sent three officers to the Nexter stand at the Eurosatory exhibition to present its future equipment to visitors. Nexter is delighted with this privileged relationship with Denmark, which is a testimony of the group’s ability to establish constant and productive links with its customers and to best meet the needs and specifications requested.

CAESAR 8×8 is the ideal solution to meet the needs of armed forces interested in a mobile, reliable, combat proven and modular artillery system and is the subject of considerable interest in several European countries, Asia and the Middle East.