ARQUUS ~ An Essential Partner For Cavalry 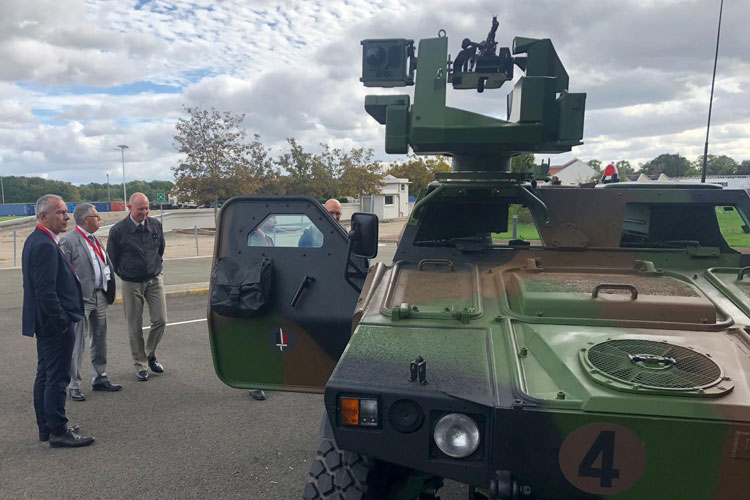 An essential partner of the French Army, ARQUUS yesterday exhibited at the Journée de l’Arme Blindée Cavalerie (Armour and Cavalry Day) at Satory.

Press Release, 08 October 2019: Essential partner of the French Army, with more than 25,000 vehicles currently in service, ARQUUS was exhibiting at the Journée de l’Arme Blindée Cavalerie, which took place in Satory on October 7th. ARQUUS presented its VBL Ultima, a modernised version of the VBL, currently being developed, its T1 and T2 remote-controlled weapon systems, developed as part of the Scorpion programme, as well as its innovative solutions for energy management and automation.

From its origins to the present day, ARQUUS’ history has always been merged with the cavalry’s. From the AMD to the AML, from the EBR to the VBL, ARQUUS’ armoured vehicles are built on a unique know-how in terms of protection and mobility, honed for more than a century by visionary engineers and craftsmen, in synergy with the military commanders and according to the Army’s needs.

Determined to accompany the Army in all of its transformations, but also to anticipate and contribute to the debate on the future of land combat, ARQUUS has developed on own equity a wide range of vehicles, some of which, as the ERC-90 Sagaie, have been selected by the forces and have proudly served for decades.

Widely appreciated by the Army and chosen by many other governmental forces globally, ARQUUS’ reconnaissance and light cavalry vehicles have been through all conflicts on all theatres of operations. ARQUUS still strengthens these close ties with cavalry through the Griffon and Jaguar vehicles of the Scorpion programme, designed and developed through a temporary grouping of companies with Nexter and Thales.

ARQUUS’ history thus merges with these iconic armoured vehicles’ legend. Combat-proven daily, and recognised globally, they are indistinguishable from the armies’ foreign operations. That history is also a constant will to accompany the cavalry though all its changes, and to meet the Arme Blindée Cavalerie’s (French Armour and Cavalry) operational needs in a fast-changing world, marked by time, technical progress and evolving foes.

To further answer the armies’ needs, ARQUUS to support and modernise its vehicles, in order to optimise their operational performance, their tactical efficiency, their autonomy and the soldier’s protection on the field.

In order to illustrate its willingness to accompany the forces throughout the vehicles’ lifecycle, ARQUUS presented a VBL Ultima. Fruit of a modernisation programme for the VBL (Véhicule Blindé Léger, Light Armoured Vehicle), while waiting for the VBAE (Véhicule Blindé d’Aide à l’Engagement, Armoured Vehicle for Engagement Support) programme, this new generation VBL is designed to operate with the Scorpion programme’s vehicles on all theatres of operations.

On Cavalry Day, ARQUUS also displayed the T1 and T2 remote-controlled weapon systems, joint elements of the Scorpion programme. These RCWS, which will equip the Griffon as soon as 2019 and the Jaguar in 2021, benefit from the most modern technologies and from a wide connectivity with the vetronics, effectively placing them at the centre of collaborative combat. 100% French-made, the T1 and T2 are the first elements of a strategic small-calibre sector, which is ready to handle and support the Army’s transformation.

Arquus brings all its energy and experience to think and build tomorrow’s cavalry. In 2017, the company has launched the development of the Scarabee, ARQUUS’ vision of the future reconnaissance and scouting vehicle, on own equity. Built on its predecessors’ experience and on the company’s know-how in terms of military innovation management, the Scarabee illustrates the company’s willingness to design, by the Army’s side, the cavalry of the future.