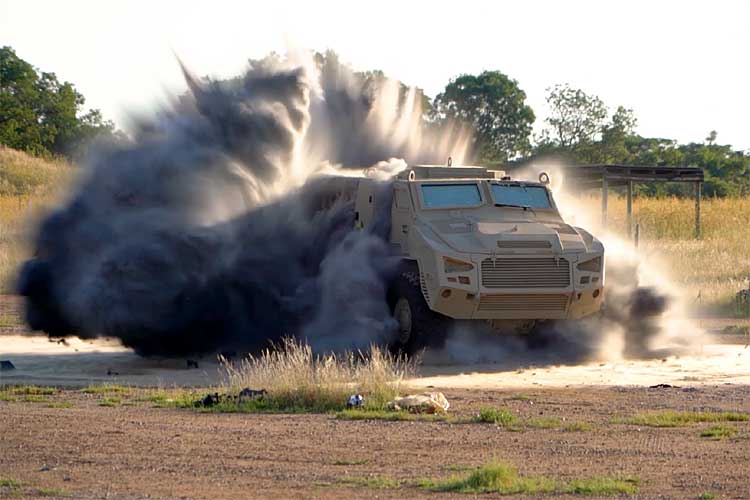 The South African Paramount Group Mbombe 4 APC has been certified as one of the world’s best protected armoured vehicles during independent blast tests.

Press Release, Johannesburg, 17 September 2019. Paramount Group, the global technology and aerospace business, has announced that the Mbombe 4×4, the newest addition to its advanced Armoured Personnel Carrier (APC) family of vehicles, has received final certification for the independently verified blast tests which exceeded the criteria for NATO STANAG 4569 – one of the highest levels of protection that can be achieved by an armoured vehicle in its class.

This announcement follows the exceptional performance of the Mbombe 4×4, which features unique flat-floor mine protection technologies pioneered by Paramount Group, during a series of explosives tests designed and executed by Landward Sciences, a programme of the Council for Scientific and Industrial Research (CSIR), South Africa’s leading and independent scientific research body.

The blast tests are performed in accordance with the highest international specifications, namely, STANAG 4569, a NATO standardisation agreement that institutes benchmarks for occupant protections in vehicles such as the Mbombe 4×4, in this case including three 10 kg TNT explosions under the wheels and the hull, and one 50kg side blast test, carried out at a 5 metre distance to imitate an Improvised Explosive Device (IED).

The Mbombe 4 was designed and developed specifically for local manufacturing in customer countries, in response to the increasing requirement from Governments for the development of their own defence industrial capabilities. The vehicle has successfully completed a series of summer trials with several armed forces around the world. Featuring next-generation design, advanced technologies and highest levels of protection, the result of decades of real-world battlefield and asymmetrical warfare experience, the Mbombe 4×4 is ready to serve customers.

Though the Mbombe 4 is equipped for full mission capability and maximum versatility, it has a singular mission – soldier survivability. Protecting the lives of combat personnel is our utmost priority; our commitment to this cause is reflected throughout our entire portfolio. In doing so, we today serve proudly as world leaders in the research, development and manufacturing of protection technologies.

As part of the blast testing programme, the integrity of the Mbombe 4 was subjected to both intense experimentations and post-test evaluations that took several months to complete, with final inspections of the Mbombe 4 yielding outstanding results. Each of these tests is intended to validate explosives resistance and occupant protection capacities for logistics and light-armoured vehicles by pushing unmodified units to their functional limits, using expertly controlled trials and post-test evaluations.

Key features of Mbombe 4 also include an unique, rear-door ramp design, which has been proven in combat on 6×6 and 8×8 IFVs. The ease of access provided by the rear-door ensures the rapid deployment of the crew while the vehicle is static or on the move.

The Mbombe 4 performs with a burst speed of 140km/hr, an 800km operating range and an independent suspension system designed to optimally meet the increasing demand for outstanding protection yet adaptability in conventional and asymmetrical warfare alike. The mine resistant carrier is functionally versatile over challenging terrains and fully operational across a myriad of contemporary and diverse counter-terrorism, border patrol, counter-insurgency, internal security and peacekeeping missions.

Both the launch of Paramount Group’s Mbombe 4 and its first customer, the United Arab Emirates were announced at the 2019 International Defence Exhibition and Conference (IDEX) in Abu Dhabi.

Full US Troop Withdrawal From Afghanistan
About Post Author