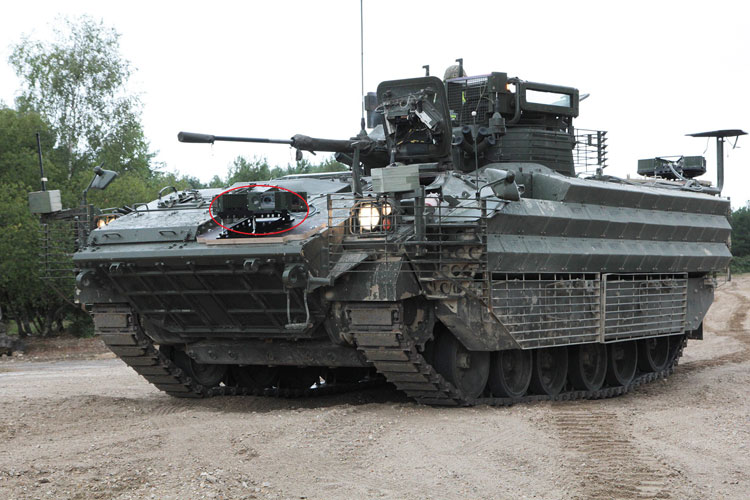 The HENSOLDT SETAS vision system for armoured vehicles has been successfully demonstrated at the British Army’s Armoured Trials Unit at Bovington.

This activity was to capture, understand and then minimise potential operating issues in the future. Fitted on a ‘Warrior’ Infantry Fighting Vehicle, SETAS demonstrated its potential to give full situational awareness in the daylight hours to the vehicle crew while staying safely inside.

SETAS was presented at this year’s Defence & Security Equipment International DSEi in London on the HENSOLDT booth,and on an ‘Eagle 6×6’ Armoured vehicle on the stand of General Dynamics.

“SETAS gives Armoured vehicle crews exceptional visibility of their surroundings”, says Andreas Hülle, Managing Director of HENSOLDT Optronics. “The user can stay in safety within the vehicle but with a high degree of situational awareness of his surrounding environment outside. Particularly in urban environment this capability is a key enabler for rapid decision making and as such platform survivability”.

The SETAS Integrated Camera Models houses two types of powerful sensors, very high resolution visual cameras (1 or 2) and two uncooled thermal imager module (UCM). The visual sensor is capable of the recognition of a pedestrian at a distance of some 300 metres. This observation capability can be further enhanced with the integration of other sensors, such as acoustic sniper detection sensors, laser warner system and a hemispherical camera to cover the area directly above the vehicle.

Using a head mounted display as HMI, a crew member inside can virtually ‘see through’ the armour achieving the same amount of orientation as observing when ‘heads up’. Intelligent software algorithms are automatically alerting the crew if a potentially threatening movement is detected within the 360° around the vehicle.

SETAS can easily be fitted as a stand-alone system. However, greater advantage of the system can be achieved if the SETAS is connected to the vehicle’s network or Battle Management System, displaying external data to each crew member individually. SETAS will be available from 2020.

*To coincide with the start of DSEI 2019 so many manufacturers and suppliers issued Press Releases that we could not realistically upload them all on the day so we plan to trickle feed through a few of the more interesting ones like this, as and when we have time and space.