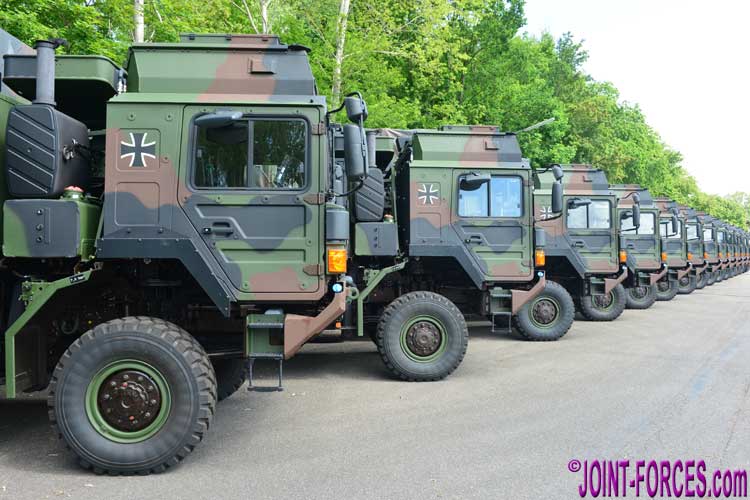 The first 60 UTF (Ungeschützte Transport Fahrzeuge) cargo trucks were handed over to units of the German Armed Forces on Tuesday, reports Carl Schulze.

On 28th May 2019 the Parliamentary State Secretary of the German Ministry of Defence, Thomas Silberhorn, handed over the first 60 brand new Ungeschützte Transport Fahrzeuge (UTF) soft-skinned cargo trucks to units of the German Armed Forces at the Feldwebel-Lilienthal-Kaserne barracks in Delmenhorst.

The Ungeschützte Transport Fahrzeuge (UTF) cargo trucks in the 5- and 15-tonne load classes, manufactured by Rheinmetall MAN Military Vehicles GmbH or RMMV, will replace the MAM Kat I range of 5-, 7-, and 10-tonne cargo trucks that formed the backbone of the tactical logistic vehicle fleet of the Bundeswehr since they entered service during the Cold War in the late seventies and early eighties. During the symbolic handover at Delmenhorst, the UTFs were taken over by Oberstleutnant Torsten Ickert, the Commanding Officer of Logistik Bataillon 161. This logistic battalion is one of six of its kind belonging to the Streitkräftebasis or SKB (Joint Armed Forces Support Command). In addition to units of the SKB units of the German Army will be issued with larger quantities of UTF trucks.

According to official information, the Ungeschützte Transport Fahrzeuge (UTF) project was launched in July 2014. Rheinmetall MAN Military Vehicles GmbH (RMMV) and Iveco Defence Vehicles both entered the tender for the UTF contract. After seven month of trials conducted by the Wehrtechnische Dienststelle 41, the technical centre for land-based vehicle systems, engineer and general field equipment in Trier, the RMMV entry was eventually chosen to become the new UTF of the Bundeswehr. On 5th July 2017 RMMV was issued a framework contract by the Bundesamt für Ausrüstung, Informationstechnik und Nutzung der Bundeswehr or BAAINBw (federal office of the Bundeswehr for equipment, information technology and in-service support) that covers the production of up to 2,571 vehicles of the HX2 truck range from this manufacturer for the Bundeswehr up to 2024. The contract has a value of about Euro 900 million and, in addition to the trucks, covers special tools for maintenance and repair, as well as training support activities. Following the issuing of the framework contract a first batch of 558 UTF – 339 in the 6×6 5-tonne class configuration and 219 in the 8×8 15-tonne class configuration – were ordered, with their delivery originally being due to be completed by 2021.

Delivery of the First Production Batch

On 26th March 2018 a total of eight UTF trucks were handed over to the BAAINBw for verification purposes. The first 20 series production vehicles were officially handed over to the Bundeswehr during a roll-out ceremony held at the MAN Truck Forum in Munich on the 30th October 2018. By end of December 2018 a total of 90 vehicles had already been delivered. With the ceremony held on 28th May 2019 at Delmenhorst the first UTF now have officially entered service with their user units. During the ceremony the Parliamentary State Secretary of the German Ministry of Defence Thomas Silberhorn stated that the last vehicles of the first batch of 558 UTF trucks will be delivered early and already handed over in 2019. He also stated that a second batch of 252 UTF trucks – 161 in the 6×6 5-tonne class configuration and 91 in the 8×8 15-tonne class configuration – will be delivered up to the end of 2019.

Major components of the trucks, such as their engines, axles, transmissions and cargo bodies are manufactured in Germany. The final assembly of the vehicles is conducted at the RMMV plant in Vienna in Austria.

The 6×6 5-tonne class and 8×8 15-tonne class UTF trucks can be operated on- and off-road and haul a trailer in order to conduct various transportation tasks. They can ford water obstacles up to 1,500mm deep, negotiate gradients of up to 60% and reach a top speed of 89km/h. Due to the fact that the vehicles are Military-off-the-Shelf (MOTS) items they are cost-efficient and feature proven and reliable technology.

The cargo bodies of the trucks are built by SAXAS Nutzfahrzeuge Werdau GmbH and are of the swap type. They are attached to a container frame by ISO-standard twist-locks and can be taken off within minutes. After removing them the vehicles can be employed to transport ISO containers, flat-racks of the Mechanisierte-Umschlag-Lagerung-Transport-Integration (MULTI – demountable rack off-load and pick-up system) or special purpose shelters. The soft-skinned cab of the vehicles offer space for a crew of three and can be hydraulically tilted for engine maintenance and repair. The crew is seated on fully adjustable air-suspended seats fitted with five-point-safety belts, manufactured by König Komfort- und Rennsitze GmbH. If required, the soft skin cab can be replaced by an armoured cab, converting the trucks into a protected vehicle. The soft-skinned cab as well as the protected cab can be fitted with a machine gun ring mount or a Fernlenkbare Waffenstation 100 (FLW 100) remote-controlled weapon station. Both can be fitted with a 7.62mm MG3 machine gun.

The trucks are based on a low-torsion ladder frame and are powered by a MAN D2066LF44 6-cylinder V diesel engine that develops 324kW. The engine is attached to a fully automatic Eco Life 7 transmission manufactured by the ZF Friedrichshafen AG. The suspension of the vehicles consists of long, wear-free, rubber-mounted springs, large shock absorbers and stabilisers.