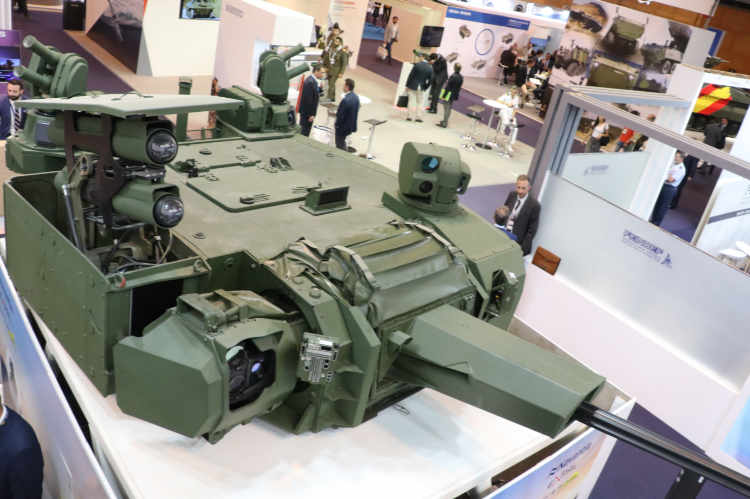 Navantia, EXPAL and Elbit systems today presented TIZONA, the 30mm unmanned turret for the future 8×8 of the Spanish Army, at FEINDEF 2019.

Press Release, Madrid, 30 May 2019: Navantia, EXPAL and Elbit Systems officially present TIZONA, the 30mm unmanned turret for the Programme ‘Combat Vehicle on Wheels’ (VCR 8×8) of the Spanish Army, at FEINDEF, the International Defence Exhibition held in Madrid from the 29th to 31st of May.

An institutional event held at Navantia’s stand at the show had an important presence by the Ministry of Defence and the Armed Forces. Susana de Sarriá, President of Navantia, put in value “the national nature of our proposal, which in addition to generating an important workload in Cádiz, is a safe bet for the Ministry, in terms of production risk reduction and life cycle”.

The presentation of TIZONA in FEINDEF confirms the agreement signed by the three companies in December 2018, which will allow both the production in Spain of the towers [turrets] and their future maintenance and updating. In this programme, Navantia provides the knowledge, experience and facilities with a high capacity to integrate and manufacture weapons systems, artillery and medium-calibre weapons, while EXPAL will be responsible for the manufacture and testing of electrical and electronic subsystems, as well as their maintenance. Elbit Sytems, as technologist, will support the start-up and qualification of the new production lines, and guarantees the low technological risk of the program. In addition to the strong domestic production plan, the partners have defined an ambitious export plan, which will benefit from the strong international vocation of the Spanish partners.

The most advanced and reliable technology: TIZONA stands out for providing the most advanced operational capabilities and technologies for the Spanish Army. It is a high precision, combat-proven system, both in static and dynamic firing, thanks to the stabilisation features of the barrel and the performance of its latest generation electro-optical systems, tested successfully in the most extreme conditions. TIZONA is integrated into the 8×8 Vehicle selected by the Ministry of Defence, including other selected subsystems such as the Spike anti-tank missile, coaxial cannon or smoke grenade launcher systems.

In addition, TIZONA will be available in both manned and unmanned versions with minimal modifications and a high level of commonality between both configurations, which would provide an important cost reduction for the Programme. The unmanned TIZONA turret has already been integrated into the same Piranha V vehicle for other NATO Armed Forces.

National value creation: This partnership will bring national value creation thanks to the development of a strong industrial plan that will generate high quality employment for Navantia and EXPAL with around 300 direct and indirect jobs, as well as investment in production facilities.

The vertical integration of the technologist ensures a sustainable life cycle in terms of maintenance and development of new capabilities, as well as flexibility to transfer the production to the Spanish partners. This transfer of technology will allow the national industry to enhance and develop new capabilities, ensuring a progressive and risk-free introduction in areas of high technological content, to ensure sovereignty.

Editor’s Note: The Piranha V has been chosen for the Spanish Army VCR programme. Five variants have been ordered, of which two will have Remote Weapon Stations and three will have turrets, including both manned and unmanned versions. Final turret designs / manufacturers will be selected further into the programme.