FEINDEF 2019 Is Underway In Madrid 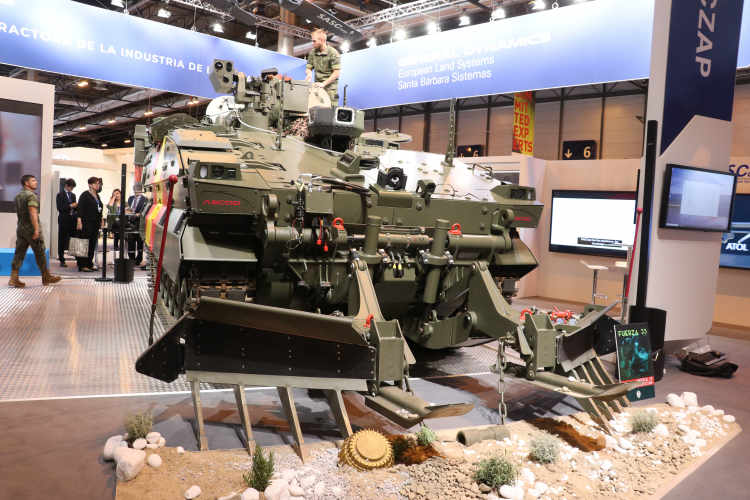 Supported by the Spanish Ministry of Defence and organised by two key business associations, AESMIDE and TEDAE, this inaugural event has already attracted sufficient support from both national and international defence sector companies to ensure it will become a biennial expo and conference.

Joint-Forces.com was up with the larks on this beautiful, clear blue skies morning ensuring we were into the expo before the crowds built up. The first thing to strike us (or, to be more accurate, to strike me) was the GDELS-SBS Pizarro Engineering Combat Vehicle which Lieutenant General Pardo de Santayana, head of the Spanish Army’s Logistic Support Command, formally took acceptance of this afternoon. We plan to come back to the Pizarro ECV, know in Spanish as Vehículo de Combate de Zapadores or VCZAP, in a little more detail at a later date.

Another Spanish newcomer which caught our eye was the NETON from EINSA, which the manufacturers describe as being an Ultrafast Tactical Vehicle. Designed specifically for a Spanish Special Forces requirement, this 4×4 can carry up to nine troops or a 1,000kg payload but it only tips the scales at around 2,000kg. The NETON, which has been evaluated by the Spanish military, including being driven in an out of a CH-47 Chinook helicopter, has a top speed of 160km/hr or around 100mph.

Our old friend THeMIS, the Estonian Unmanned Ground Vehicle or UGV, was also in attendance but this was not the same vehicle I photographed at Jõhvi earlier this month but one of three currently being evaluated by the Spanish Army and it was displayed with an EM&E Guardian 2.0 remote weapon system. This 12.7mm system is gyrostabilised for enhanced firing accuracy on the move and the optics allow the operator to identify targets more than 3,000 metres distant.

Finally, I could not let a defence expo pass without mentioning boots or rations. You will have to wait for the boots, but here is a shot of part of the UTE Raciones display stand of Spanish Combat Rations. In addition to a comprehensive brief from the helpful Noemi, I also came away with a detailed catalogue illustrating current Spanish Armed Forces ration packs.

Day One at FEINDEF was very interesting indeed, but I suspect tomorrow may well turn up further intriguing Spanish defence and security exhibits for me to learn about.