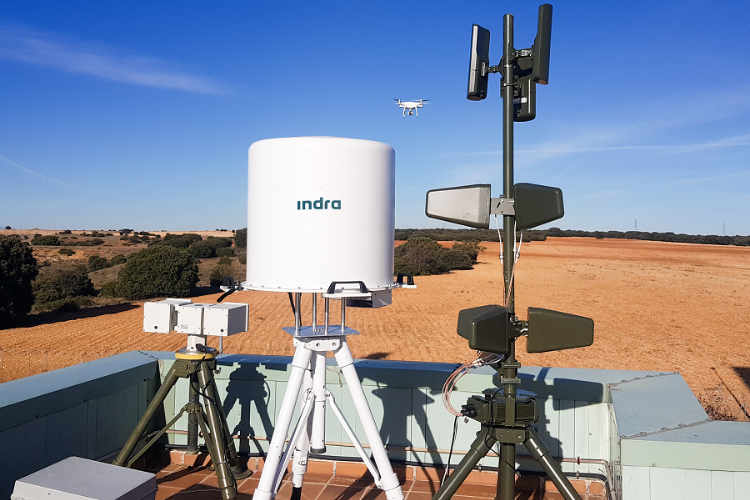 Press Release, Madrid, 28 May 2019: Indra has an anti-drone system that can operate in an integrated manner with anti-aircraft defence systems to multiply its effectiveness in the protection of military bases and installations.

The threat posed by these aircraft keeps growing as their capabilities, availability and ease of use increase. Just a few weeks ago, Saudi Arabia reported an attack against oil installations by several drones loaded with explosives. In a conflict zone, these types of attacks are common.

Indra’s ARMS (Anti RPAS Multisensor System) system increases security because it works both independently and autonomously, and integrated with anti-aircraft systems. Thanks to this capability, the system is able to cross-reference data and rule out all correctly identified objectives, focusing only on those that may pose a real risk. It acts as a valuable part of the anti-aircraft system, providing maximum efficiency in the detection of small drones kilometres away.

The multi-sensor strategy of the ARMS system combines the capabilities of different sensors (such as radars, radio frequency detectors and infrared cameras, among others) increasing and reinforcing the ability to detect and identify threats. It has the most advanced countermeasures to disrupt and saturate the drone’s communications, along with its location and navigation systems. It also uses spoofing techniques to distort the real GPS signal, hindering or even blocking its ability to navigate.

The ARMS command centre incorporates the most powerful intelligence tools to identify the type of drone in order to choose the most effective countermeasure. The operator can take manual control or schedule an automatic reaction if a drone goes beyond the established limits, ensuring a constant defence of the installations.

Only a few companies can offer an anti-drone system to be integrated with the anti-aircraft system of a country, military base or platform, as well as with surveillance radars. Indra can offer this because they are one of the leaders in the development of military radars, anti-aircraft defence systems, electronic warfare, communications and remotely piloted aircraft (RPAS) throughout the world. Having a complete vision of all the technologies allows it to offer a solution completely adapted to the needs of each client and scenario.

Indra’s ARMS system has already been tested in the area of operations against real threats, in addition to having been acquired by the Ministry of Defence of an Asian country, having confirmed its effectiveness.

air defence, anti-drone, ARMS, Featured, Indra
You may also like