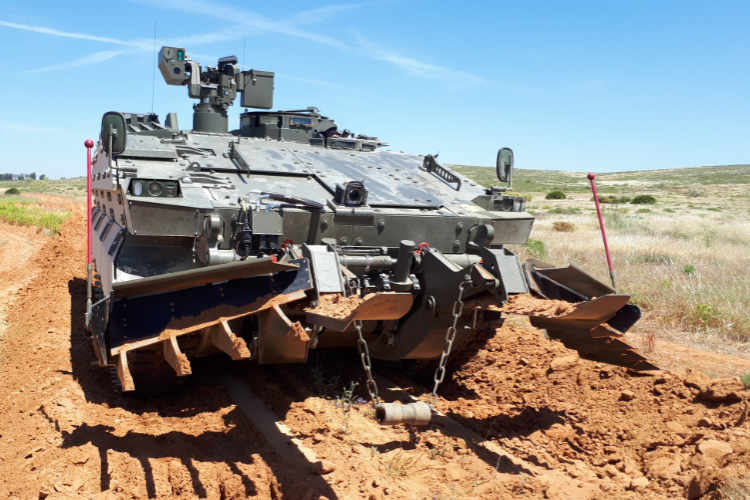 Press Release, Madrid, 27 May 2019: General Dynamics European Land Systems (GDELS) will present the Engineering Combat Vehicle (ECV) for the first time at the International Fair of Defence and Security (FEINDEF), taking place on 29th, 30th and 31th of May at IFEMA exhibition centre in Madrid. This is the last version of the ASCOD/Pizarro Family of vehicles, built for the Spanish Ministry of Defence.

The Engineering Combat Vehicle is a tracked armoured vehicle that has been commissioned by the Spanish Ministry of Defence. It complements the different variants already delivered as part of Phases I and II of the Pizarro Programme, in total 225 vehicles.

The ECV offers the Spanish Army with a unique capacity since it has a flexible automated system installed in a single vehicle, allowing the installation of different equipment required for each specific mission (dozer blade, track wide mine plough, mine roller, obstacle marking systems, and winch). In addition to its specific mission equipment, it provides the highest international standards in terms of protection (anti-mine and ballistic), as well as maintaining the excellent mobility, which has always been the international hallmark of ASCOD.

General Dynamics European Land Systems – Santa Barbara Systems is the original designer and manufacturer as well as systems integrator of the base platform. This fact has allowed the Engineering Combat Vehicle to have an important growth capacity. Since its initial conception, the platform was designed and equipped with physical pre-installations to integrate the main mission teams that the Spanish Army could require in the future (LSAS, BMS, communications, protection, etc.).

As a Systems Integrator, General Dynamics European Land Systems – Santa Bárbara Sistemas has been able to comply with the requirements for future growth and flexibility required by the Directorate General of Armament and Material (DGAM) of the Spanish Ministry of Defence during the phase design, complying at all times with the production schedules established contractually.

The vehicle presented at FEINDEF is the first of the 36 contracted units. Simultaneously, two other variants of the ASCOD family, one with an unmanned 30 mm tower and another with an integrated bridge system, will be exhibited at the IDET exhibition that will take place in the city of Brno in the Czech Republic, where General Dynamics European Land Systems will present this tracked armoured vehicle as one of the candidates for the Tracked Vehicles Programme of the Czech Ministry of Defence.