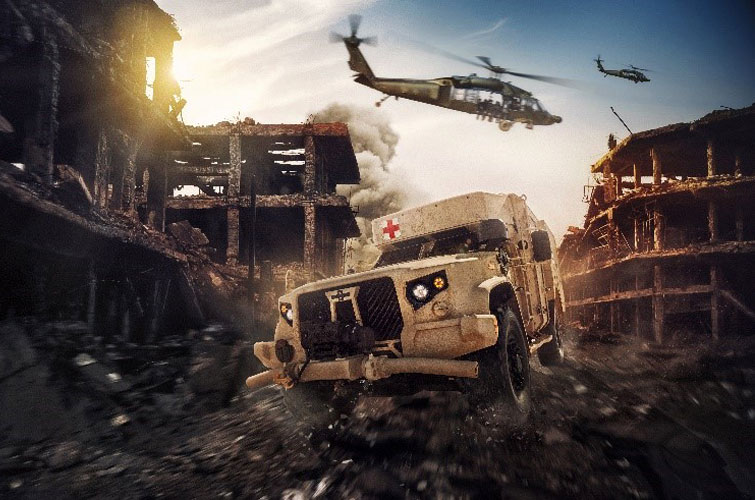 Oshkosh Defense has announced the company is premièring the Ambulance variant of the L-ATV At AUSA Global Force Symposium 2019.

Press Release, 26 March 2019: Oshkosh Defense, LLC, an Oshkosh Corporation company, will showcase for the first time its L-ATV Ambulance at the Association of the United States Army (AUSA) Global Force Symposium in Huntsville, AL, from March 26-28, 2019.

The new L-ATV Ambulance enables Army medics and Marine corpsmen to keep up with the powerful Joint Light Tactical Vehicle (JLTV) while also offering protection for medical personnel and wounded warriors as they move to, through and away from combat.

“The L-ATV Ambulance is the next generation of ambulance vehicles, designed specifically to protect wounded Warfighters without sacrificing the speed and mobility needed to keep up with JLTVs on the battlefield.” said George Mansfield, Vice President and General Manager, Joint Programs. “In addition to its ability to protect and manoeuvre with the JLTV in combat operations, the L-ATV Ambulance has the flexibility and payload capacity medics require to transport life-saving equipment, allowing them to safely and efficiently perform their operations on the move.”

With the L-ATV Ambulance’s powerful drivetrain and TAK-4i intelligent independent suspension system, the vehicle can travel off-road at JLTV speeds while the vastly improved ride quality enables medics and corpsmen to render medical aid while transporting the wounded to combat support hospitals.

The L-ATV Ambulance’s rear cab area can hold 4 litters or up to 8 seated patients or a combination of the two. There is also ample storage for any combination of high-use combat medical equipment.

Featured, L-ATV, Oshkosh, Oshkosh Defense
You may also like