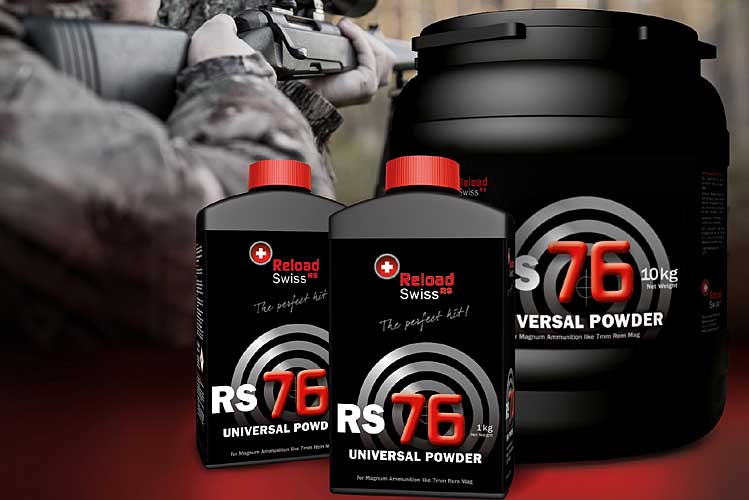 Press Release, 08 March 2019: Newly developed, the RS76 is a universal powder for assembling rifle ammunition. It is suitable for multiple calibres, including .338 Lapua Magnum, 7mm Remington Magnum, .338 Norma Magnum and .300 Norma Magnum. America’s Special Operations Command (US SOCOM) is currently evaluating the latter two, for Nitrochemie an encouraging sign of government interest in the new product.

Ever since its market launch five years ago, Nitrochemie Wimmis AG with its top-notch Reload Swiss RS products has focused on becoming a full-spectrum supplier of propellant powder – from small-calibre pistol applications to large magnum assemblies. RS76 is now the thirteenth powder in the company’s product range.

The RS76 bridges the gap between its established, tried-and-tested RS70 and RS80 powders. As developer Reload Swiss RS Dominik Antenen explains, “the RS80 was ideal for the popular .338 Lapua Magnum with 300-grain projectiles. But when it was used with the equally popular 250-grain projectile, the results were no longer quite so good.” After consulting with Reload Swiss RS importers, the company decided to resolve this issue with help of the newly developed RS76. “The objective was to pass on the good genes of the RS70 and RS80 to the RS76.”

In recent years the famous shooting competition in Bisley was won with the RS70, resulting in two European championship titles in the F Class, i.e. the rifle class. The RS80 also enjoys a robust reputation among competition shooters at ranges of 600 metres and over. “With this in mind, we endowed the RS76 with a good pressure and velocity ratio, sensible temperature independence and a de-copperising additive”, continues Antenen, noting that “it goes almost without saying that we included a muzzle flash suppressor in the package as well as the best-possible stabiliser”

The first batch of RS76 powder is currently being filled, and will reach the shops in the second quarter of 2019. The new powder is available in the accustomed 1-kg can and 10-kg drum.