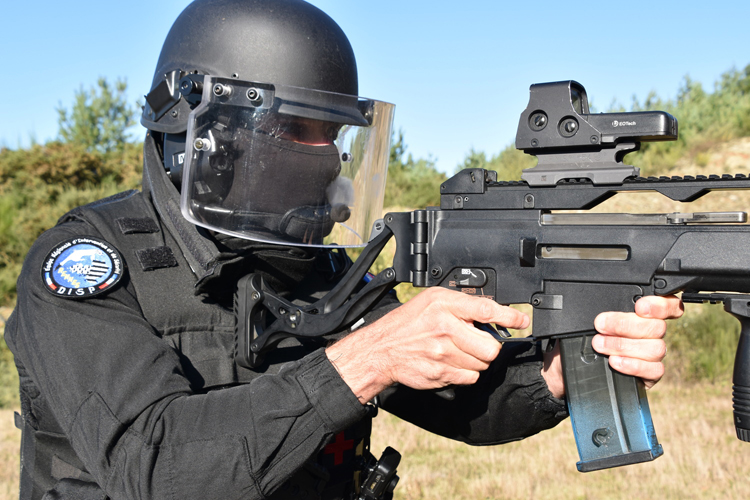 BCB International have confirmed that the elite French police tactical unit GIGN has selected their FRAMM modular stock for their H&K G36 and HK-UMP firearms.

Press Release, 21 February 2019: Riot and ballistic face shields are essential for law enforcement officers in active shooter and riot control scenarios. The problem with these face shields is that once fully lowered they interfere with the assault rifles and/or less-lethal baton round guns that armed officers are equipped with.

164 year old survival equipment manufacturers, BCB International Ltd, have brought to market the FRAMM®; an adjustable and foldable stock that allows firearms officers to comfortably shoulder, aim and discharge their firearms in all firing positions while wearing a ballistic helmet with the visor fully lowered. BCB International’s FRAMM Project Manager, Philippe Minchin, said: “Since production was launched in late 2018, orders have been received from elite tactical units like the GIGN whose officers use ballistic helmets with face shields. We offer multiple variants of the stock to fit onto most in service firearms.

“The FRAMM® is not your typical helmet rifle butt stock. It removes the need for both non-visored and visored officers to have to alternate between butt stocks to fit the situation they are faced with. At a press of a button, the FRAMM enables an officer to switch from a classic straight alignment to a lowered setting of their choosing thereby eliminating the risk of their helmet visors or respirator masks interfering with the shouldering, aiming and firing of their weapon. The FRAMM is the modular stock to suit all their mission requirements.” For more information about the FRAMM please e-mail info at bcbin dot com or visit bcbin.com/product/framm-weapon-stock/