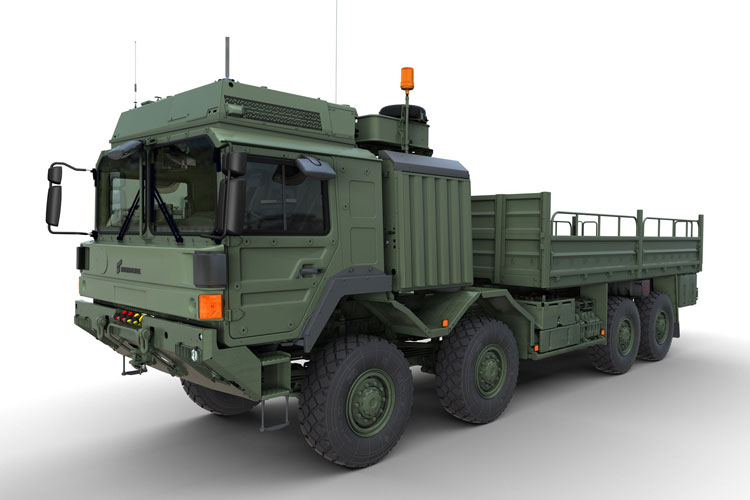 Press Release, 17 January 2019: Rheinmetall has been awarded a contract from the Swedish armed forces to supply vehicles for transporting PATRIOT air defence systems made by Rheinmetall’s partner Raytheon. Starting in the first quarter of 2021, Rheinmetall MAN Military Vehicles (RMMV) will supply Sweden with a total of forty high-mobility trucks from its HX series, including 16 tractor trucks and 24 transport vehicles. The order is in the double-digit million-Euro range.

FMV, the Swedish procurement authority, has already ordered other HX vehicles for its logistics corps. The latest order placed with RMMV for transport vehicles for the PATRIOT air defence system is in line with the vehicle family concept; moreover, it underscores the customer’s satisfaction with these tried-and-tested ‘military-off-the-shelf’ vehicles.

The latest generation of HX2 vehicles fulfils all the criteria modern logistic vehicles are expected to meet: maximum mobility, ruggedness, versatility and the ability to handle even the worst roads and toughest terrain. Increasingly important, too, are flexible add-on force protection solutions for safeguarding the crew. At the same time, HX2s are among the world’s most widely used military trucks, with some 10,000 currently in service around the globe, representing enormous operational experience. Particularly in multinational operations, the ubiquity of Rheinmetall MAN vehicles offers big advantages when it comes to interoperability and logistics.

Among others, the current group of user nations includes Great Britain, Australia, New Zealand and Denmark. In the meantime, Norway, Sweden and – most recently – Germany have all placed substantial orders with Rheinmetall MAN as well.

The newly awarded order is the first joint procurement project of Raytheon and Rheinmetall since the launch of their teaming agreement in March 2018. PATRIOT forms the backbone of integrated air defence and anti-missile defence for seven NATO nations, and is interoperable with seven other partner countries worldwide.