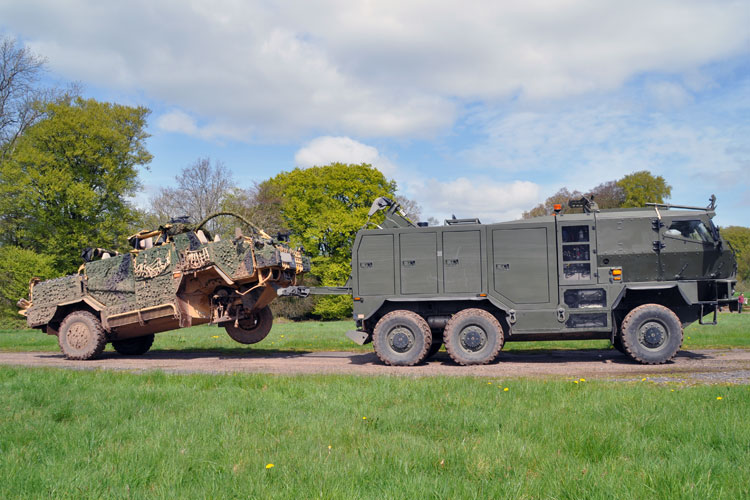 Press Release,18 September 2018: Since the launch of the Supacat HMT Light Weight Recovery (HMT LWR) vehicle at DSEi in September 2017 the prototype vehicle has been undergoing trials both by Supacat at its test facility and by CSS TDU (Combat Service Support Trials & Development Unit). The trials have identified areas with potential for further capability gains and enhancement to the original specification. The next phase of development trials will start in October 2018 and will continue throughout 2019.

The 6×6 HMT LWR offers high levels of agility, off-road performance and protection in common with Supacat’s High Mobility Transporter (HMT) family, which includes `Jackal` and `Coyote` now within UK MoD’s Core Fleet. HMT LWR utilises many HMT design features such as the variable height air suspension system, engine and drive line that have been battle proven in numerous theatres. Blast and ballistic protection has been built into the chassis providing the optimum protection for its weight of 10.5 tonnes.

HMT LWR utilises an innovative new Supacat designed technology, `Supalift` (patent pending), which increases the size of vehicles that can be recovered by a light weight recovery vehicle. HMT LWR’s recovery system can be operated both in conventional mode and by the operator engaging `Supalift`, which increases the maximum lifting weight of the recovery system by up to 50%. In conventional mode the HMT LWR recovery system lifts a maximum recovered vehicle axle mass of 3.8 tonnes and in `Supalift` mode rises to 6.1 tonnes (specification based on recovering an HMT 400 `Jackal 2`). `Supalift` technology is based on the principle of distributing the weight of the casualty vehicle more evenly over the recovery vehicle.

Phil Applegarth, Head of Supacat, said, “We are very excited by the potential of this pioneering vehicle. The HMT platform has proven itself as the vehicle of choice for modern fighting forces and we look forward to the successful delivery of this latest addition to the HMT family. It will be a game-changer in extending the lifting capability of recovery systems for defence and other industry sectors.”

Designed by Supacat, the HMT product is manufactured under licence from Lockheed Martin.