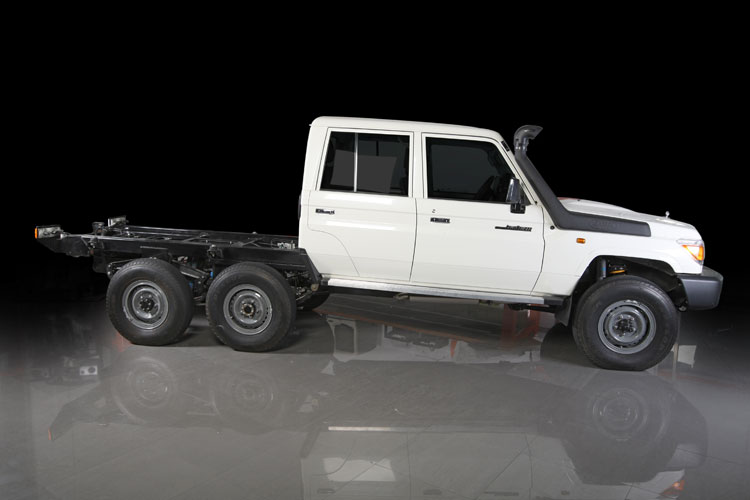 Jankel, a world-leader in the design and manufacture of high-specification defence, security and NGO vehicles and protection systems, is launching an exciting new addition to their FOX range of tactical vehicles.

Press Release: Having partnered with NSV and MDT, Jankel are now able to offer 6×6 variants of their Toyota-based FOX vehicles. The new FOX variants utilise the Multi-drive 6×6 technology, originally developed in Australia and built by NSV. This launch coincides with the Defence Vehicle Dynamics (DVD) event taking place on 19/20 September 2018 at Millbrook, where Jankel will be exhibiting their capabilities on stand number OR-12.

The new 6×6 FOX variants benefit from increased payload and capacity whilst maintaining the mobility and tactical fighting capability already well-proven with the 4×4 configurations. Using NSV experience and Multi-drive technology, Jankel can deliver an all-wheel drive solution that has been proven over years of durability testing and in-service use with mining, exploration and government organisations. The 6×6 FOX has a Gross Vehicle Weight (GVW) of 6,300kg and offers a significant and configurable payload of up to 3,000kg. The increased vehicle length also delivers additional user payload and operational space. Both the 6×6 and 4×4 FOX variants carry as standard a crew of 3 or 4 and can achieve speeds of up to 96mph/155kmh at maximum GVW. Available in both Toyota Hilux and Land Cruiser 79 series base platforms, this new addition to the FOX family increases the role and variant flexibility on offer to the user whilst maintaining automotive and logistic cross-fleet commonality. As already proven, the Fox vehicle is capable of withstanding the roughest treatment in the harshest of environments.

Jankel has successfully developed their business model in recent years to become a company that delivers fully engineered tactical and military vehicles, with the benefits of matching a range of highly capable COTS chassis systems. In 2015, Jankel was awarded a contract by the Belgium Ministry of Defence (BeMOD) to supply over 100 FOX 4×4 Rapid Reaction Vehicles (RRV).

At DVD, as well as the extended 6×6 base platform for the FOX, Jankel will be presenting a range of Toyota-based options including a Civilian Armoured Vehicle (CAV) Land Cruiser 200 (LC200) series and a Fox RRV-x, alongside a Mercedes Benz UNIMOG that is used as the base drive train for the Light Troop Transport Vehicle (LTTV) currently being developed for the Belgian Ministry of Defence. With the Armoured LC200 CAV, Jankel will be show-casing specialist upgrades delivering higher protection levels, including innovative security and safety technologies.

Sam Foreman, Head of Sales at Jankel said: “the new 6×6 FOX variants are an important addition to our growing vehicle family. Payload and capacity are high-value assets to the war-fighter so offering users increased capability whilst maintaining the levels of mobility and fleet commonality is a key step for our existing and future users.” He added: “Our partnership with NSV and MDT is fundamental to the success of this new 6×6 variant as with this partnership comes well-proven, reliable technology that can be integrated into our existing 4×4 designs”.