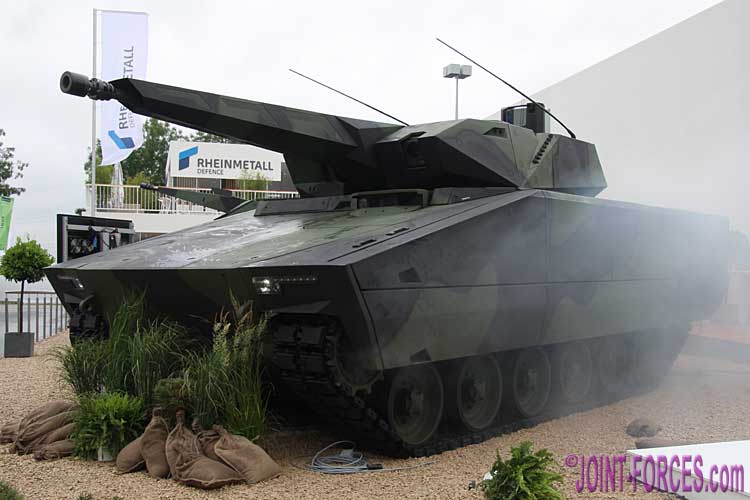 Press Release: Highly survivable, adaptable to diverse environments, extremely agile, hard hitting, and with huge payload reserves, the Lynx KF41 is a next-generation combat vehicle designed to confront the challenges of the future battlefield like no other.

Most experts agree that land forces will face unprecedented threats on the future battlefield, where emergent technologies have substantially changed the balance of power. Key technologies influencing armoured fighting vehicle (AFV) design for the future include anti-access/area denial systems that reduce the ability to gain and retain air dominance, electronic warfare systems that will deny reliable communications, enhanced artillery systems that restrict freedom of action, and advanced AFV designs that are difficult to defeat with existing systems.

In concert with the technology challenges of future combat, land forces need to be relevant across the full spectrum of conflict, including contributing to peace keeping operations, conducting counter-insurgency campaigns and engaging in general war-fighting against constantly evolving threats in diverse global environments.

It is with these challenges in mind that Rheinmetall has developed the Lynx KF41 family of vehicles and the companion Lance 2.0 turret, resulting in a revolutionary IFV with a level of adaptability, survivability and capacity not seen before in an IFV family.

Ben Hudson, global head of Rheinmetall’s Vehicle Systems Division said, “With the Lynx KF41, the Rheinmetall team has developed a truly innovative next-generation combat vehicle. The breadth of capabilities that a Lynx IFV provides soldiers results in a veritable Swiss Army knife that has unprecedented utility across the full spectrum of conflict. Its modular, adaptable survivability systems allow the vehicle to evolve through life, the high level of mobility will provide battlefield commanders great tactical flexibility in combat, and the diverse effects that the Lance 2.0 turret can generate allow the crew to deal effectively with a wide variety of battlefield situations”.

Turreted and RWS variants of the Lynx KF41 family [©Rheinmetall]

The Lynx KF41 is a complete family of vehicles that utilises a common drive module and a flexible mission kit arrangement to allow any base vehicle to be configured as an IFV, an armoured personnel carrier, a command vehicle, a recovery vehicle or an ambulance. Changing from one configuration to another can occur within eight hours. This system provides significant total lifecycle cost savings due to base vehicle commonality, allowing customers to adjust force structures or develop new capabilities in an affordable and timely manner.

Footnote: Overnight tonight, vehicle mechanics will convert the Lynx KF41 IFV on display at EUROSATORY into a Command Post variant. As the Joint-Forces.com team of Carl and Bob left the expo site this evening the mechanics were preparing to remove the Lance 2.0 turret as part of this conversion in what is believed to be a first at a defence expo. We will return to the subject of the Lynx 41 in some detail in the future.