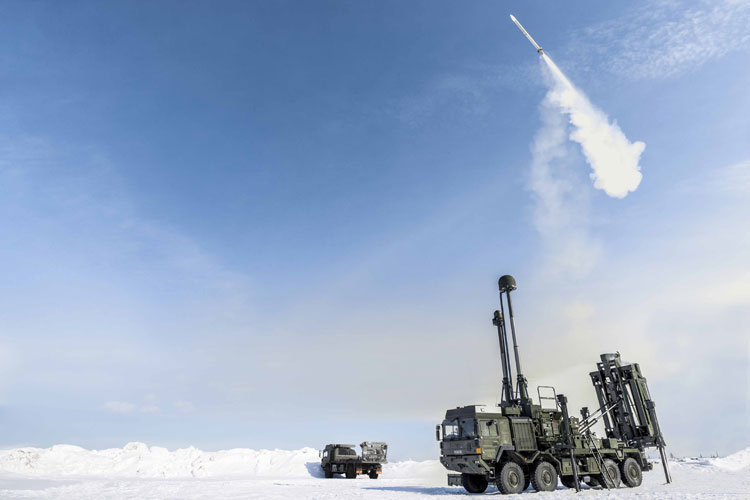 MBDA’s Land Ceptor Air Defence System has successfully destroyed its target during an end-to-end system demonstration firing at the Vidsel Test Range in Sweden, an important milestone for the project prior to entry to service with the British Army.

Press Release: Land Ceptor utilises the proven Common Anti-air Modular Missile (CAMM) currently in production and delivering a common stockpile to meet the air defence needs of both the British Army and the Royal Navy (as Sea Ceptor). In British Army service Land Ceptor will replace the current Rapier Air Defence System and provides a step-change in capability, including over triple the range and the ability to intercept a much more challenging target set.

The system demonstration trial showcased the maturity of the Land Ceptor system across a full engagement sequence. This included launcher deployment; munition loading; receipt of air tracks from a Giraffe-AMB radar; air track processing by Land Ceptor’s onboard command and control (C2) system; and execution of a full engagement chain, with two-way data exchange with the missile during its mid-course fly-out phase, and successful interception and destruction of a target using the missile’s seeker in the terminal phase.

Land Ceptor with CAMM is the latest generation of air defence system, providing exceptional capability from very short ranges (VSHORAD) below 1 km into the medium range air defence (MRAD) tier beyond 25km. Key features of CAMM are its next generation solid-state active radar seeker, two way data-link, low-signature rocket motor and its 360° soft-vertical launch system. These combine to enable the missile to rapidly intercept the most challenging and dangerous of threats including saturation attacks from precision guided munitions and manoeuvring high-speed missiles emerging late from low altitude and from multiple directions simultaneously.

The demonstration in Vidsel coincides with the transition into production of the Land Ceptor weapon system, which will now undergo system-of-system integration and test as part of the British Army’s Sky Sabre air defence architecture. It is the latest in a series of highly successful trials of CAMM and its related systems over several years that have consistently proven its maturity and game changing performance.