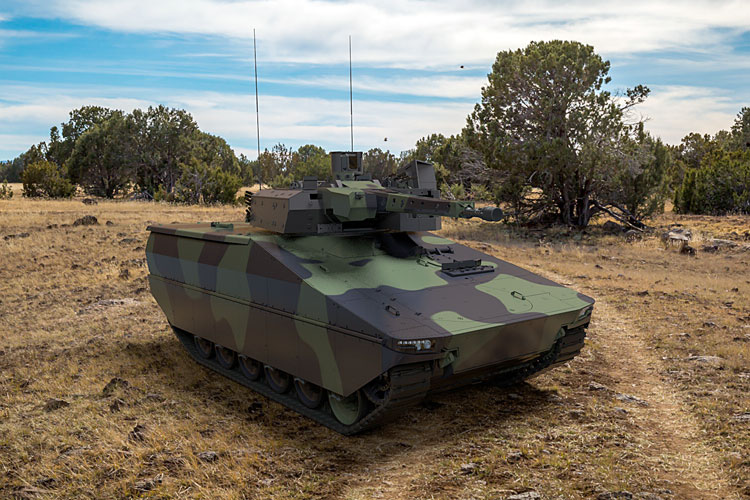 The Czech armed forces are currently pressing ahead with a far-reaching modernisation programme. Among other things, its fleet of BMP-2 infantry fighting vehicles, which dates from the 1980s, is to be replaced with a family of modern systems.

Press Release, 17 April: Procurement of over 200 new medium-weight fighting vehicles is on the table. Most of these are to be equipped with a high-performance medium-calibre turret. Rheinmetall – a proven, longstanding partner of Czech industry – has put forward its new Lynx for this project, a medium-weight, modular platform armed with the Lance turret system

Right from the outset, the Lynx was designed for maximum modularity. Characterised by superb survivability, off-road mobility and overall combat effectiveness, it is based on tried-and-tested technologies. Heavily armed, highly protected and extremely agile, this tracked armoured vehicle is built to assure successful outcomes on the battlefield. It lends itself to military operations ranging from peace enforcement missions to high-intensity combat.

During comparative trials in Vyskov last summer, Rheinmetall entered the lists with a Lynx equipped with the Lance turret. The Lance turret’s main armament is a stabilised, airburst-capable automatic cannon, available in 33mm and 35mm versions. This lets the Lynx engage targets at ranges of up to 3,000 metres with precision, effectiveness and efficiency, even when on the move. The vehicle can also be armed with various antitank guided missiles such as the EuroSPIKE, which the Czech and German armed forces both have in their inventories. Other effector options include remotely controlled weapon stations as well as a package of advanced electronic countermeasures.

The Lynx infantry fighting vehicle is available in two versions: the KF31 and KF41 (KF stands for Kettenfahrzeug, the German word for ‘tracked vehicle’). First unveiled in 2016, the Lynx KF31 weighs up to 38 tonnes, and can comfortably carry a three-man crew and six-man section of fully equipped infantrymen in complete safety. Weighing in at over 40 tonnes, the Lynx KF41 is roomy enough to seat two extra troops. Both vehicles – the Lynx KF31 and Lynx KF41 – can be quickly and easily configured for other missions, including command and control, reconnaissance, repair and recovery or medevac operations – and the list goes on.

‘By Czechs, for Czechs’ – a concept tailored to meet customer requirements
But it’s not just the platform that is so compelling. Rheinmetall wants to include the Czech defence industry in the project in a major way. The planned deadlines for commissioning are to be worked out in close cooperation, with development and production to take place in both the Czech Republic and Germany.

Local development and production as well as the establishment of a robust supply chain will bolster Czech national sovereignty and the Lynx’s Czech DNA, assuring the long-term viability of the country’s defence sector as a key member of the NATO alliance. Moreover, the project will result in the creation of highly qualified jobs in the Czech Republic and added value for Czech companies, while simultaneously increasing the operational effectiveness of the Czech Army. Furthermore, Rheinmetall is eager to include as many Czech firms as possible in its global supply chain.

Today Rheinmetall is already an important partner of Czech industry. The Group’s Automotive unit produces car parts in Ústí nad Labem. In the defence domain, RayService supplies Rheinmetall with wiring harnesses for combat vehicles. And in cooperation with Ceská zbrojovka a.s., Rheinmetall is a major supplier of ammunition to the Czech armed forces. Other cooperation partners include Quittner & Schimek s.r.o, VOP CZ, sp and Rohde&Schwarz. The project to modernize the Czech Republic’s fleet of IFV would lead to a further intensification and expansion of cooperation.