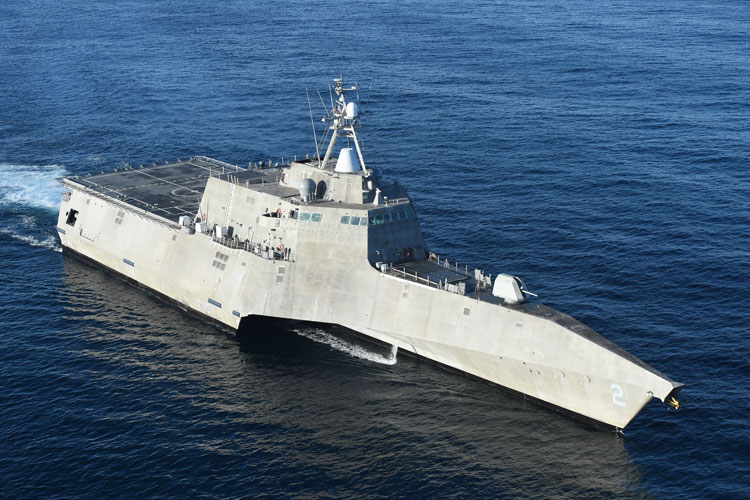 Additional Mk110 Naval Guns are set to board US Navy Littoral Combat Ships – the fully automatic Mk110 gun system, known internationally as the Bofors 57Mk3, is the deck gun of choice for the LCS.

The fully automatic Mk110 gun system, known internationally as the Bofors 57Mk3, is the deck gun of choice for the LCS. It is a multi-mission, medium-caliber shipboard weapon, effective against air, surface, or ground threats without requiring multiple round types. The system is capable of firing up to 220 rounds per minute at a range of more than 9 nautical miles using BAE Systems’ six-mode programmable, pre-fragmented, and proximity-fused (3P) ammunition.

“BAE Systems’ Mk110 Naval Gun, together with our advanced 3P programmable multi-purpose ammunition, provides a unique capability to address multiple air, sea, and land threats,” said Lena Gillström, general manager of Weapon Systems Sweden at BAE Systems. “This additional Mk 110 order for the LCS is evidence that this system is among the best medium-caliber naval guns in the world. Sailors benefit from its adaptability, robust endurance, and pointing accuracy, even in high wind waves and swells.”

Deliveries are expected to take place during 2019 and 2020. The 57-millimeter Mk110 is currently in service with the Navy’s LCS and the US Coast Guard’s National Security Cutter. Also selected for the Coast Guard’s new Offshore Patrol Cutter, the Mk 110 has been proposed for the Navy’s future frigate FFG(X) program. To date, BAE Systems has 28 Mk110 guns contracted to the Navy and 11 to the Coast Guard. Worldwide, there are 86 Mk110/57Mk3 naval gun systems under contract with eight nations.