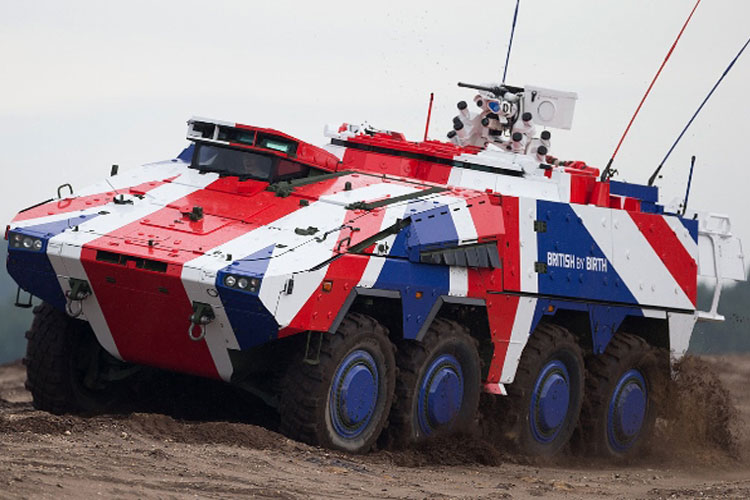 The UK will re-join the BOXER programme and explore options to equip the Army with the 8×8 troop carriers to modernise its vehicle fleet and meet the Army’s Mechanised Infantry Vehicle (MIV) requirement.

MoD Press Release: The UK played a major role in the original design, development and testing of the BOXER, and would reassume the rights it had as a project partner if a deal was to go through – allowing the option for the vehicle to be built and exported from the UK. The deal could see the BOXER fully assembled in the UK with at least 60% of the manufacturing with British industry, sustaining and developing UK industrial capabilities, facilities and skills.

Artec, the consortium who manufacture the BOXER vehicle, have already made commitments to British industry by signing partnership agreements with BAE Systems, Pearson Engineering and Thales UK, in anticipation of a deal being struck.

It is expected that British companies would compete for the manufacture and supply of many of the vehicle sub-systems, as well as for a full production and assembly line in the UK. Estimates suggest Artec’s planned investment in the UK could secure or create at least 1,000 jobs, based across the country including locations such as Glasgow, Newcastle, Sheffield, Stockport, Telford and Wales.

With the likes of Rolls Royce already powering BOXERS with engines and Parker-Hannifin, William Cook Engineering and other British companies also supplying sub-systems for the vehicle, this deal could secure a broader industrial UK partnership.

The MOD is now taking forward negotiations with the Organisation for Joint Armament Cooperation (OCCAR) and Artec. Looking forward to the Assessment Phase, concluding in 2019, this will consider the comparable benefits of manufacturing locations and different supply chains for BOXER, as well as value-for-money. Any deal will be subject to commercial negotiation and assessment in 2019 and the aim is to have the first vehicles in service with the Army in 2023.

OCCAR is a European intergovernmental organisation which facilitates and manages collaborative armament programmes through their lifecycle between the UK and European allies. The organisation manages the BOXER programme and, as an OCCAR member state, the UK has the necessary Intellectual Property Rights to the BOXER and greater control over ensuring Britain benefits from supply chain work.

The MOD conducted a comprehensive market analysis of Mechanised Infantry Vehicles in-service, entering service and in development. The analysis was guided by the British Army’s requirements and how best to deliver them. The BOXER delivered on protected mobility, capacity, flexibility, utility and agility.

As part of the proposed deal, the UK is also expected to see substantial inward investment from Rheinmetall, one of Artec’s parent companies, who signalled their intention to launch a production and integration centre for armoured vehicles in the UK as part of the programme. This would represent a significant commitment which would lead to long-lasting armoured vehicle capability in the UK.

The other of Artec’s parent companies, Krauss-MaffeiWegmann (KMW), already has a substantial UK manufacturing facility in Stockport, from where it designs, manufactures and supports complex military equipment as far afield as the US and Australia, as well as parts of Europe.