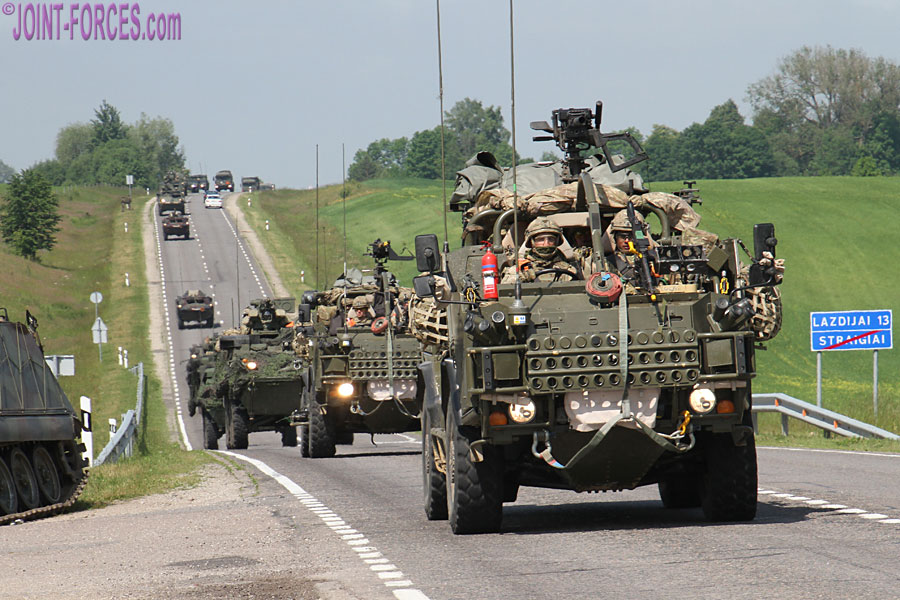 Library image of a joint UK, US and Polish military convoy conducting a 'Passage of Lines' through the German-led NATO eFP Battle Group in Lithuania to practice keeping the Suwalki Gap corridor open [©BM]

The Dutch MoD has announced that the EU Council of Ministers has invited the UK to join the Netherlands-led project on military mobility.

News Release, The Hague, 15 November 2022: The United Kingdom will join the Netherlands-led project on military mobility. This was decided today by the EU Council of Ministers. The project is aimed at removing obstacles for military movements and speeding up travel times within the European Union both on road, rail, air and inland waterways.

Dutch Minister of Defence, Kajsa Ollongren: “I am very much welcome today’s Council decision and we will send the official invitation to London today. The UK is an important military ally and will provide a lot of added value to the project. It is a positive signal that the UK is seeking cooperation with the EU on defence matters. We very much need each other in these turbulent times.”

British Secretary of Defence, Ben Wallace: “We are joining the Dutch-led MILITARY MOBILITY project, which will better enable us to deploy troops and equipment across Europe and crucially support EU-NATO cooperation. Working with our EU partners, we will ensure greater European security and a collective and determined response to our support for Ukraine”.

EU High Representative, Josep Borrell: “Russia’s war against Ukraine has further demonstrated that being able to move troops and military equipment swiftly across Europe and beyond is essential for our security. Sharing information and experiences with key partners is crucial. The PESCO project MILITARY MOBILITY led by the Netherlands provides the right platform in this regard. After the US, Canada and Norway joined last year, the UK’s participation is yet another proof of the importance of this project. Ensuring fast movement and secure transport of armed forces is crucial to improve the EU and NATO’s ability to respond to crises, in particular now as we provide urgent military support to Ukraine.”

PESCO: MILITARY MOBILITY is one of the projects within the framework of Permanent Structured Cooperation (PESCO). PESCO was launched in 2017 in order to enable EU Member States to enhance their defence cooperation. Since end of 2020, the PESCO framework is open to participation by non-EU Member States, provided they fulfil a number of preconditions. This was first applied to the MILITARY MOBILITY project, when Canada, Norway and the United States joined in 2021. In July 2022, the United Kingdom sent a request to the Netherlands to join the project. This request was first discussed at project-level and then forwarded with a positive advise to the Council in Brussels, which took a positive decision on this today.

In the PESCO project on MILITARY MOBILITY the 24 participating EU Member States and Canada, Norway and the US – and now soon the UK as well – work together to speed up military movements in Europe. These military movements still face to many administrative and infrastructural hurdles, such as custom formalities or too small roads and bridges. Taking away these hurdles is usually a national responsibility. The PESCO project provides the framework for the participating countries to exchange information on their national endeavours, thus improving military mobility throughout Europe.