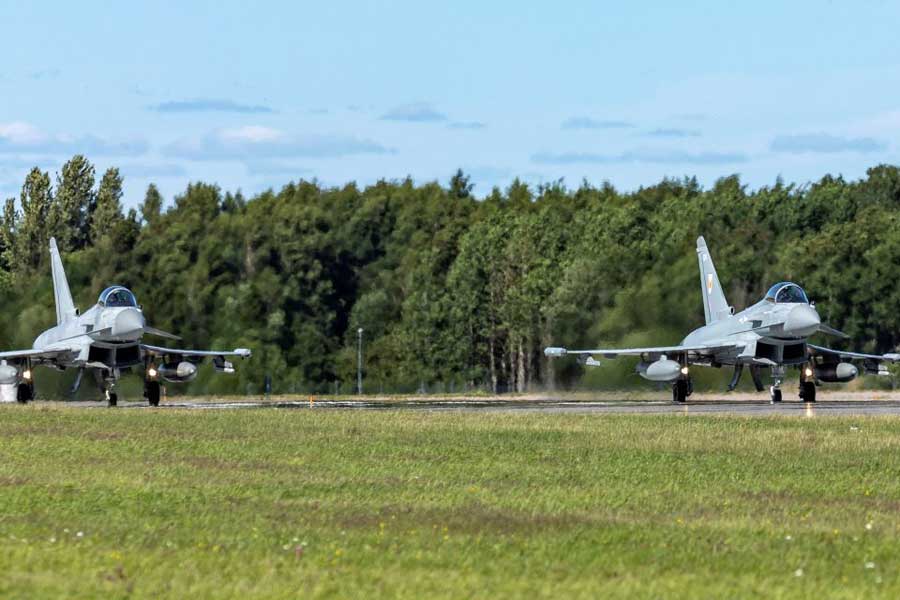 Over the last month the RAF has deployed Typhoon FGR4 and F-35B Lightning fighter jets to Finland, and Typhoon FGR4 jets to Sweden.

Press Release, Whitehall, 10 July 2022: The Royal Air Force has deployed Typhoon FGR4 and F-35B Lightning jets to Finland, and Typhoon FGR4 jets to Sweden, for integrated fighter aircraft training as part of an increased presence in the region.

The deployments, which took place over the last month at the request of the host nations, allowed the partner air forces to develop their joint tactics and strengthen their ability to operate alongside each other. Two F-35Bs and four Typhoons conducted high-end warfighting training with Finnish F-18 Hornets and Swedish Gripen aircraft, underlining the UK’s commitment to strengthening our collective defence capabilities.

The deployments are a practical demonstration of the mutual security assurance declarations that the UK signed with these nations in May, as they progress their respective applications to join NATO. All three nations already work together through the UK-led Joint Expeditionary Force, which is a coalition of 10 member nations who cooperate to maintain the security of Northern Europe.

Secretary of State for Defence, Ben Wallace, said: “Finland and Sweden are important defence partners and we welcome their applications to join NATO, which will make the alliance stronger as we face a renewed threat in Europe.

“These deployments highlight our determination to enhance that partnership and ensure our forces can work together seamlessly.”

The F-35 deployment to Finland was only the second time that the aircraft type has landed in the country, after two US F-35A visited for an air show in June. The F-35B’s arrival was of particular interest to the Finns as they recently announced that they will purchase F-35 aircraft. The UK Lightning Force will continue to develop their partnership with the Finnish Air Force as they integrate their new aircraft.

Swedish Defence Minister Peter Hultqvist said: “The Joint Expeditionary Force contributes to regional security and stability. Joint exercises, like the one here in Såtenäs, strengthen our ability to operate together in response to a crisis in our neighbourhood. This is particularly important in today’s challenging security environment.”

The fighter jets were supported by teams of specialists from RAF Marham and RAF Lossiemouth. A Voyager aircraft from RAF Brize Norton also provided air-to-air refuelling to extend the duration of the combat sorties and an A400M Atlas deployed the support team to Sweden.

Working with similarly advanced air forces such as the Finnish and Swedish also provides an opportunity to learn from each other and identify areas of mutual benefit. The deployed teams spent time further integrating their systems, so that they can share information quickly on the exercise and in the future.

These exercises are part of a series of bilateral and Joint Expeditionary Force exercises planned this year at Finland and Sweden’s request. Later this month the UK will deploy the F-35B to Norway for further integration training with the Norwegian Air Force.

The Typhoon Force also deployed aircraft to Konya in Türkiye for similar integrated fighter training with the Turkish Air Force, flying alongside Turkish, Pakistani, Jordanian and Azerbaijani aircraft in simulated combat scenarios. The Typhoons forward deployed from Romania where they are currently supporting the NATO Air Policing mission.