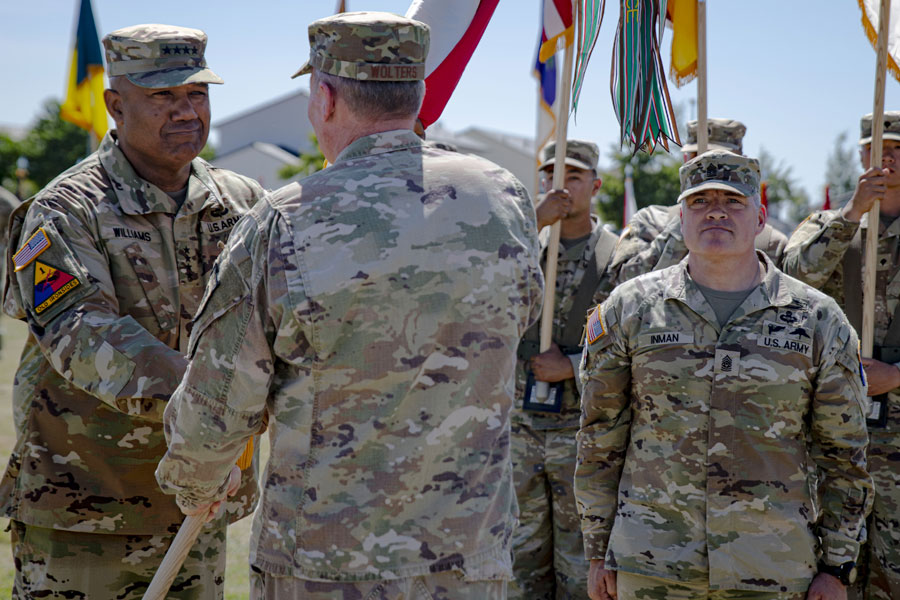 Gen. Darryl Williams, the new commander of US Army Europe and Africa, accepts the guidon from Gen. Tod D. Wolters, commander of US European Command and NATO's Supreme Allied Commander Europe (SACEUR) , during the Change of Command Ceremony on June 28, 2022, at Clay Kaserne in Wiesbaden [US Army: SSgt. Amanda Fry]

Gen. Christopher Cavoli, the outgoing US Army Europe and Africa commander, relinquished command of the organization to Williams in a ceremony officiated by Gen. Tod Wolters, the US European Command commanding general and Supreme Allied Commander Europe for NATO, and Lt. Gen. Kirk Smith, Deputy Commander US Africa Command.

No stranger to assignments in Europe, Williams previously served as the commander of NATO Allied Land Command in Izmir, Turkey. In addition, he held positions as the commander of US Army Africa, in Vicenza, Italy, as well as the deputy chief of staff G3/5/7 of the former US Army Europe in Wiesbaden, Germany. Most recently he served as superintendent of US Military Academy West Point.

“Darryl, we know that you have a ton of experience to draw upon,” Wolters said to the incoming commander. “And we know that we’re in a pivotal phase. A lot of your Soldiers have suffered from lack of sleep the over the course of the last seven months as they continue to work on all of the problems that exist in the region, to include what we face with respect to the senseless invasion of Ukraine by Russia. And we know this – this component has led from the front to serve that cause and support Ukraine. And we also know that there is no better Soldier on planet earth better equipped to lead US Army Europe to success over the course of the next several months in tackling this problem.”

Williams also reiterated US Army Europe and Africa’s commitment to international allies and partners. “We continue to stand by you, as you have stood by us for decades. As our motto states, we are “Stronger Together” – and we look forward to continuing to strengthen those bonds of friendship and interoperability.”

The outgoing US Army Europe and Africa commanding general heads to US European Command. He will replace Wolters and assume command of all US military forces within the European theatre and also serve as the Supreme Allied Commander Europe for NATO.

Change of Command, Featured, Gen Darryl Williams, US Army Europe and Africa, USAREURAF, Wiesbaden
You may also like