An Apology To Dutchbat III From Their Prime Minister 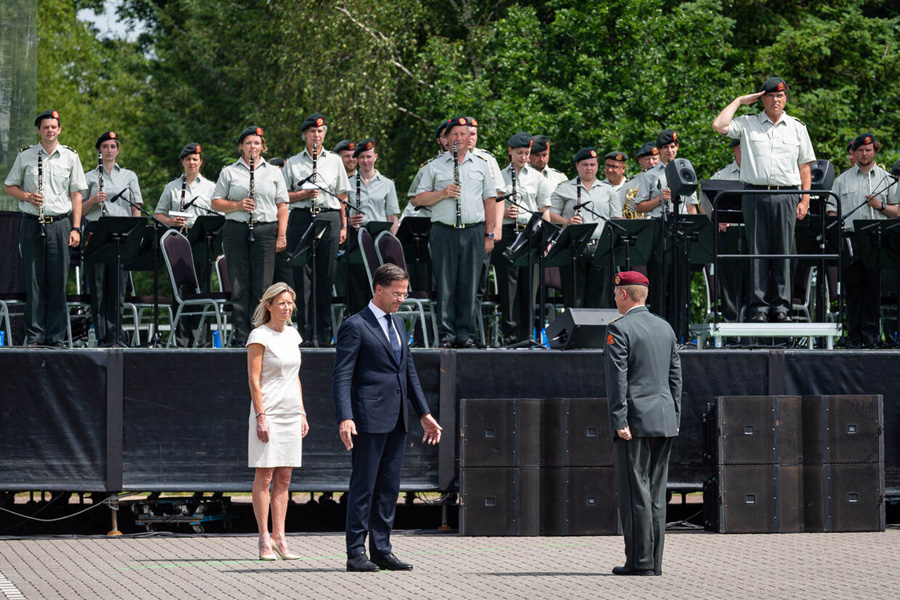 An apology from Prime Minister Rutte of the Netherlands to Dutchbat III veterans, 27 years after the fall of Srebrenica in Bosnia.

News Release, The Hague, 18 June 2022: “A maddening inability to do the very thing you joined up to do: protect people and defend our democratic values. And that sense of being cut off from the outside world, abandoned by everyone. And then afterwards, you were the target of easy recriminations, from critics who were safe and sound here in the Netherlands. So yes, I understand that question very well: where was the world?” These were the words of Prime Minister Mark Rutte, spoken today as he addressed approximately 325 Dutchbat III veterans.

Almost 27 years after the fall of Srebrenica, Dutchbat III veterans had come to Schaarsbergen to catch up, to talk about their memories of Srebrenica and to support each other in their suffering that often has yet to be processed; suffering, because they were sometimes held responsible for the genocide carried out by the Bosnian Serbs under command of General Mladić.

The world looked away: There was a blunt answer to the question ‘Where was the world?’. Rutte: “(…) this thought immediately confronts us with the dreadful fate of over 8,000 men and boys who were murdered in cold blood after the fall of Srebrenica. Where was the international community when they needed protection? The answer is as upsetting as it is blunt. The world failed them, in the most terrible way.”

Heartbreaking choices: Rutte conceded that for a great many veterans, Srebrenica remains an unfinished chapter. “The lack of recognition is something you feel every day. Recognition of the fact that your mandate, your equipment and the military support you received during your mission were all inadequate. You were sent out into the field with an assignment that ultimately proved impossible to carry out. While at your own compound there came a point when there was a lack of even the most basic necessities.”

Unequal battle: Kajsa Ollongren, Minister of Defence, also had strong views on the situation at that time. “(…) when the attack came and the requested assistance did not materialise, you defended Srebrenica in an unequal battle: a handful of armoured vehicles with machine guns against a superior force of tanks and artillery. Indeed, 55 of you were taken hostage by the Bosnian Serbs. And after thousands of Bosnian boys and men had taken to the mountains, you, a few hundred soldiers, received tens of thousands of terrified women and children into your care. It became a humanitarian disaster on an unprecedented scale.”

Rutte went on to say that at home there was little understanding of the impossible position of Dutchbat III and the heartbreaking choices that the soldiers had had to make, often in a split second, in the chaos around them. “And you were not given adequate support from government leaders and the military leadership, when you faced a barrage of unwarranted criticism.”

Abandoned: Ollongren agrees that the Netherlands turned its back on the soldiers of Dutchbat III. “For too long, your experiences were not acknowledged. Perhaps most glaringly of all, not even by the Netherlands Ministry of Defence. You were heard but not really listened to. There was not enough aftercare, not enough support, and not enough correction regarding the general perception of your mission. That has left deep scars. Many of you still need care and support. A lasting shadow hangs over many lives.”

Unjustifiable public criticism: According to Rutte, almost 27 years after the event much has still been left unsaid.“It is an oft-noted fact that the Srebrenica mission took place under a UN mandate. But that does not alter the Dutch state’s special responsibility for the circumstances in which you were deployed, the way you were treated upon your return and the lack of support given to Dutchbat III when it was wrongly subjected to so much public criticism.”

Apology and appreciation: Rutte continued: “Therefore, today I apologise on behalf of the Dutch government to all the women and men of Dutchbat III. To all of you here and to those who are not with us today. With the greatest possible appreciation and respect for the way in which Dutchbat III kept on trying to do the right thing, under very difficult circumstances, even when that was really no longer possible.” In order to further underline this message, Ollongren awarded each Dutchbat III veteran the Medal of Merit in bronze.

Today’s gathering is a result of earlier recommendations made by the Borstlap Committee regarding care, recognition and appreciation for Dutchbat III veterans. The committee made the recommendations after an ARQ National Centre for Psychotrauma study into the group of veterans. Last year, the Ministry of Defence announced that it would implement these recommendations.

Apology, Bosnia, Dutchbat III, Featured, Srebrenica, the Netherlands
You may also like