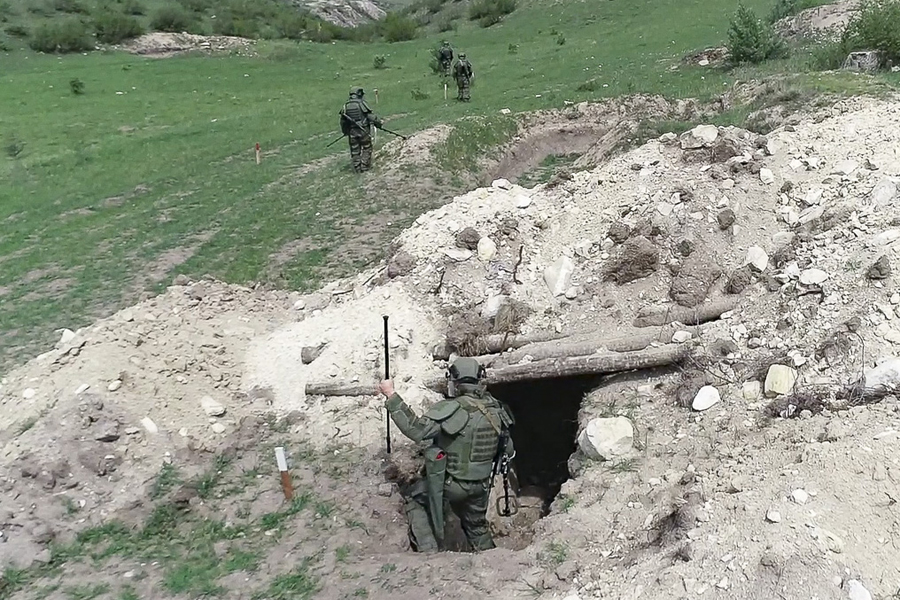 Russian sappers demine farmland on the outskirts of the Pirjamal village in Nagorno-Karabakh and continue to destroy discovered ammunition.

Russian MoD Press Release, 29 April 2021: [Auto-translated] Russian sappers demine farmland on the outskirts of the Pirjamal village in Nagorno-Karabakh and continue to destroy the discovered ammunition at the Ballidzha training ground.

The engineer-sapper groups of the humanitarian demining company of the Russian peacekeeping contingent continue to clear the territory of Nagorno-Karabakh from mine danger and explosive objects. Currently, Russian servicemen are actively searching for explosives on the outskirts of the Pirjamal village, located in the Askeran region of Nagorno-Karabakh. Here, on the territory of agricultural land, during the hostilities, there were military positions. Until today, local residents could not resume agricultural work. During the work on the territory of the former military positions, the area was completely cleared by sappers of the humanitarian demining unit of the Russian peacekeeping contingent.

In total, since 23 November 2020, 2051 hectares of territory, 625 kilometres of roads, 1721 buildings, including 30 socially significant objects, have been found and neutralised by the military personnel of the humanitarian demining unit from unexploded ordnance, 25,600 explosive objects have been found and neutralised. Explosive objects discovered by sappers are removed and destroyed at a specially equipped Ballidzha training ground. Ammunition that cannot be evacuated is destroyed on site with all the necessary safety measures during blasting operations.