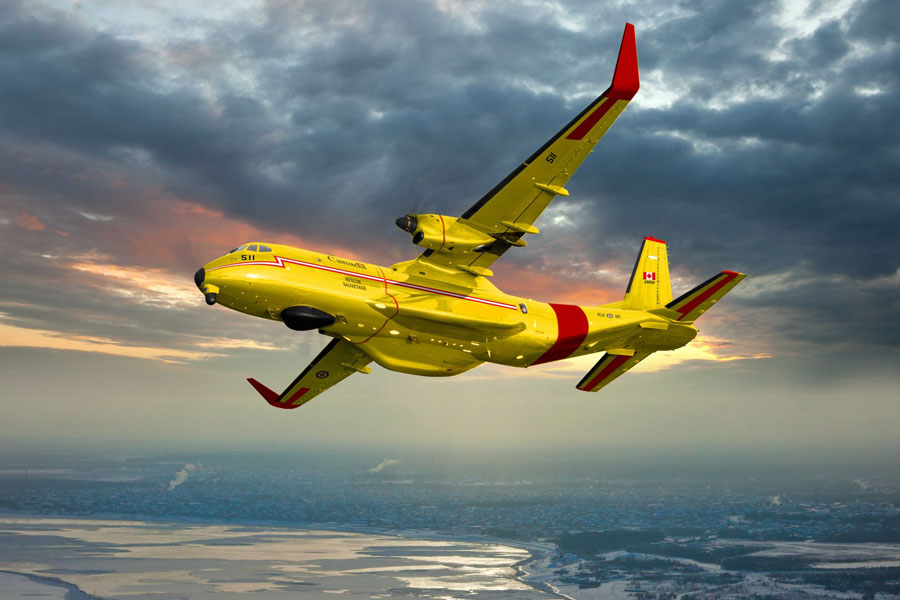 CAF Press Release, Comox, 25 September 2020: The Government of Canada is equipping the Royal Canadian Air Force (RCAF) with the modern and effective aircraft it needs to continue its critical life-saving search and rescue missions across Canada’s vast and challenging territory.

Today, the RCAF marked the arrival of the first aircraft of its future fixed-wing search and rescue fleet. The new fleet will be called Kingfisher. Within the First Nations of the Northwest, the kingfisher has long been recognized for its speed and agility, as well as its keen searching and hunting skills. Found all across Canada, the kingfisher well represents the abilities of our own search and rescue crews to accomplish their lifesaving role.

Specifically designed to perform search and rescue missions across Canada, the aircraft is equipped with integrated sensors that will allow crews to locate persons or objects from more than 40 kilometres away, even in low-light conditions. Its communications systems will increase interoperability with other search and rescue assets, such as the CH-149 Cormorant. The fleet of 16 aircraft will be replacing the CC-115 Buffalo and CC-130H Hercules fleets in their search and rescue role at four locations across Canada, and represents a value of $2.4 billion.

The aircraft received earlier this month will remain at 19 Wing Comox while the RCAF completes aircrew training, followed by operational testing. During the transition period and while the CC-295 Kingfisher is being operationalised, fixed-wing search and rescue services will continue through existing fleets, along with the CH-149 Cormorant and CH-146 Griffon helicopters.

The delivery of this aircraft marks an exciting new chapter in Canada’s long and proud search and rescue history, and this project has created hundreds of new jobs for Canadians. The CC-295 contractor, Airbus Defence and Space, continues to make investments into the Canadian aerospace and defence industry through the Industrial and Technological Benefits Policy. Strategic work packages directly related to the aircraft are providing Canadian companies the opportunity to participate in global supply chains and creating high-value jobs.

“As outlined in Canada’s defence policy, Strong, Secure, Engaged, it is essential that our search and rescue crews have the modern and effective aircraft they need to carry out this critical work. I am thrilled at the arrival of this first CC-295 Kingfisher in Comox as it represents another successful milestone for this project, while also supporting our mission of being strong at home.” The Honourable Harjit S. Sajjan, Minister of National Defence

“The Government of Canada is committed to building a more agile, better-equipped military, while ensuring the best value for Canadians. I am proud to mark the arrival of the first fixed-wing search and rescue aircraft in Canada as we reach an important milestone for this procurement project.” The Honourable Anita Anand, Minister of Public Services and Procurement Canada

“As Canada welcomes its new fixed-wing search and rescue aircraft, our government also welcomes the many jobs and investments this procurement is generating for the Canadian economy. Important economic benefits through the Industrial and Technological Benefits Policy are helping our economy to grow and move forward through this challenging time.” The Honourable Navdeep Bains, Minister of Innovation, Science and Industry

“The selfless dedication of our aviators and the search and rescue services they provide to Canadians brings great credit to the Royal Canadian Air Force and the Canadian Armed Forces. The transition to the new fixed-wing search and rescue fleet is a tremendous opportunity for us and one that we take on with determination and pride.” Lieutenant-General Al Meinzinger, Commander of the Royal Canadian Air Force