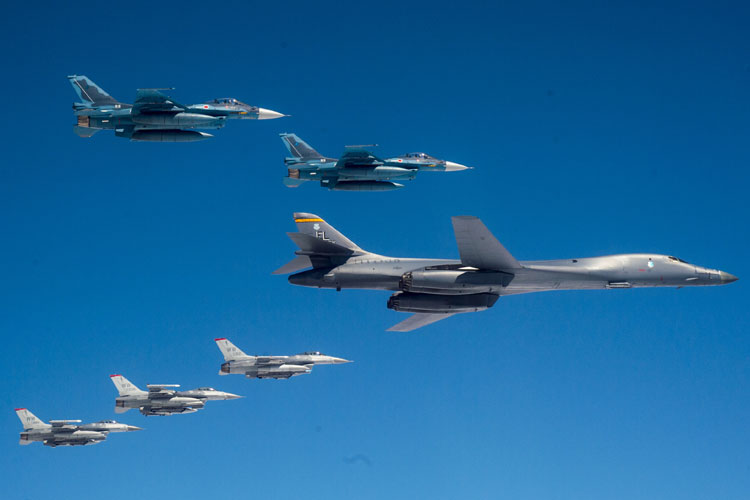 In demonstration of the US Air Force dynamic force employment model, a B-1B Lancer bomber flew from the United States to train with the JASDF on 22 April 2020.

USAF News Release, Pearl Harbor, 22 April 2020: In demonstration of the US Air Force’s dynamic force employment model, a US Air Force B-1B Lancer bomber flew from the continental United States and integrated with the Kōkū Jieitai (Japan Air Self Defense Force or JASDF) to conduct bilateral and theatre familiarisation training near Japan April 22.

The B-1, flew a 30-hour round-trip sortie from Ellsworth Air Force Base, S.D., to the Indo-Pacific and teamed up with six US Air Force F-16 Fighting Falcons, seven JASDF F-2s and eight JASDF F-15s over Draughon Range near Misawa as part of a joint US Indo-Pacific Command (INDOPACOM) US Strategic Command (USSTRATCOM) Bomber Task Force (BTF) mission before returning home.

“This operation showcases our unwavering commitment to the security and stability of the Indo-Pacific region through the employment of strategic forces from around the globe,” said Gen. CQ Brown, Jr., Pacific Air Forces and INDOPACOM Air Component commander. “From confronting invisible threats of a global pandemic to addressing military aggression and coercive activities, we remain a lethal, innovative and interoperable force focused on a shared vision of upholding a free and open lndo-Pacific.”

In line with the National Defense Strategy’s objectives of strategic predictability and operational unpredictability, the US Air Force transitioned its force employment model to enable strategic bombers to operate forward in the Indo-Pacific region from a broader array of overseas and CONUS locations with greater operational resilience.

“Like the advancements of our Agile Combat Employment concept of operations, we continue to innovate and adapt our approach, to include how we deploy and employ the various weapons systems we integrate with our allies and partners,” Brown said. “Bringing the B-1 into theatre ensures our bilateral interoperability accounts for any combination of flying operations to prepare for and outpace the rapidly growing threats in the Indo-Pacific region.”

This marks the second CONUS-based bomber bilateral training to occur this year with the JASDF. On Feb. 3, two B-52s integrated with six USAF F-16s and more than 45 JASDF fighter aircraft in the vicinity of Misawa Air Base, Japan. Those bombers flew from Andersen Air Force Base, Guam, and Minot Air Force Base, N.D.

“The rapid employment of airpower directly supports the National Defense Strategy and assures we can provide overwhelming force anywhere, anytime in support of American interests or our Allies and partners,” said Gen. Tim Ray, Air Force Global Strike Command and Air Forces-Strategic commander. “This mission is a demonstration to our friends throughout the region: we will continue to remain fully predictable in our commitment to ensuring peace, while also demonstrating that we have the ability to operate from numerous locations across the globe, even during the global pandemic.”

The B-1 is assigned to the 28th Bomb Wing and the F-16s are assigned to the 35th Fighter Wing from Misawa Air Base, Japan. The last time the B-1 was in the INDOPACOM area of responsibility was January 2018, when the airframe and crews completed a six-month Continuous Bomber Presence mission at Andersen. During that time, the 9th Expeditionary Bomb Squadron from Dyess Force Base, Texas, conducted a number of sequenced bilateral missions with the Republic of Korea Air Force and the JASDF.

USSTRATCOM has conducted BTF missions (previously known as Bomber Assurance and Deterrence missions) since 2014 as a demonstration of the US commitment to collective security, and to integrate with Geographic Combatant Command operations. The first mission included B-52H Stratofortresses and B-2 Spirits travelling from the continental United States to Joint Base Pearl-Harbor Hickam in April 2014.