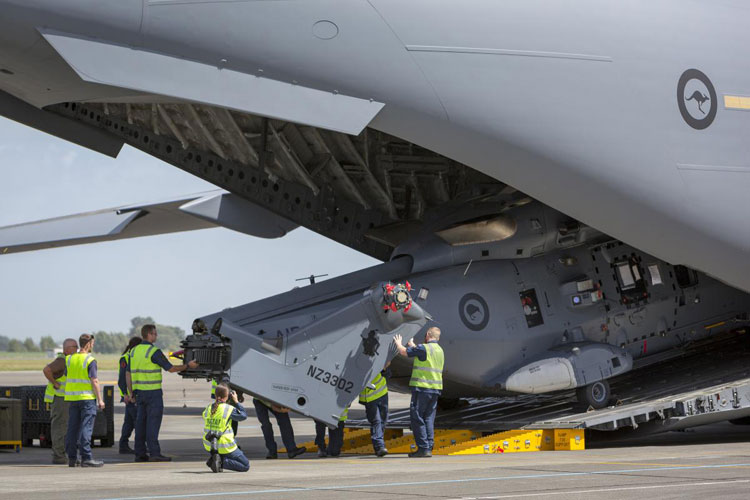 RAAF and RNZAF personnel load the RNZAF NH-90 helicopter onto a RAAF C-17A Globemaster III which flew it to from RNZAF Base Ohakea to RAAF Base Richmond [ADoD: Corporal Nicci Freeman]

An RAAF C-17A Globemaster has delivered the first of three RNZAF NH-90 tactical transport helicopters to Australia as part of Operation BUSHFIRE ASSIST.

The Globemaster picked up the NH-90 from RNZAF Base Ohakea on January 6, then flew it to RAAF Base Richmond, north-west of Sydney, on the same day. The airframe is identical to the aircraft operated by the Australian Army and the Royal Australian Navy and will be performing the same role as its Australian counterparts.

The addition of the New Zealand aircraft to the Australian fleet will improve defence mobility and responsiveness to requests for assistance from emergency services. This is one of many offers of help the Australian government has received from international friends and partners, including Chinooks from Singapore.

The C-17 Globemaster III provides Air Force with exceptional capacity for strategic lift and is the only aircraft able to transport 77 tonnes of cargo.