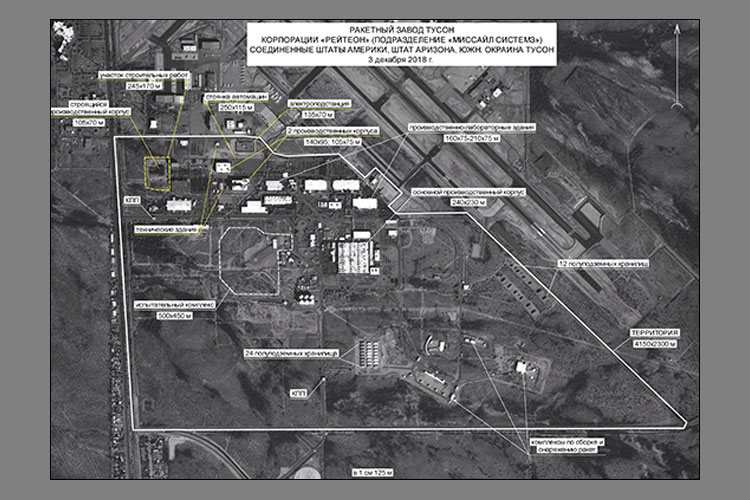 Press Release, 2 February 2019: In Washington, two years before the public unproved accusations of Russia of alleged violation of the Intermediate-Range Nuclear Forces Treaty (INF Treaty), they not only made a decision, but also began preparations for the production of intermediate-range missiles banned by the treaty.

Thus, according to irrefutable information available at the Russian Ministry of Defence, since June 2017 the enterprise of the Raytheon military-industrial corporation in the city of Tucson, Arizona, has launched a program of expansion and upgrade of production facilities in order to create medium and shorter-range missiles banned by the INF Treaty. This plant is the largest diversified enterprise of the US space industry, producing almost all types of rocket weapons, including medium-range and short-range cruise missiles. Over the past two years the space of the plant has increased by 44% – from 55,000 to 79,000 sq m, while the number of employees is about to rise by almost 2,000 people, according to official statements.

In November 2017, the US Congress allocated to the Pentagon the first tranche amounting to $ 58 million, directly pointing at the development of a land-based missile of intermediate range. Thus, the work carried out irrefutably proves that the US administration decided to withdraw from the INF Treaty a few years before it started making public unfounded accusations against Russian of violating the Treaty.