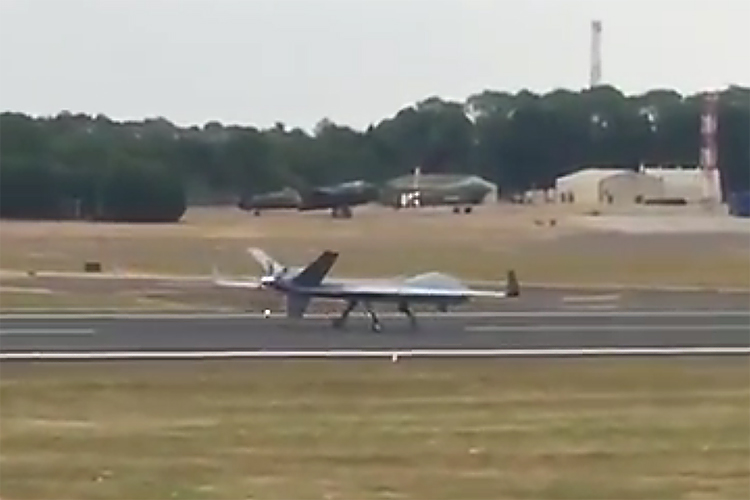 Last night while many in England were sitting down to watch a football match, following a 24-hour non-stop flight a GA-ASI SkyGuardian MALE RPA, ordered by the RAF as PROTECTOR RG Mk1, successfully touched down at RAF Fairford.

“This historic event was a demonstration of the endurance and civil airspace capability of the MQ-9B SkyGuardian, and it is fitting to do this as part of the centennial celebration of the RAF,” said Linden Blue, CEO, GA-ASI. “The successful flight of the MQ-9B is the culmination of the hard work and innovation of our dedicated employees, and the strong relationships that we enjoy with the RAF, the UK Civil Aviation Authority (CAA), the Royal International Air Tattoo (RIAT) and our UK industry partners such as Cobham.”

RAF Fairford will be the site of the RIAT airshow from 13 – 15 July. The MQ-9B will be on static display during the show.
Over the past ten years, the RAF has operated GA-ASI’s MQ-9 Reaper RPA in support of the NATO and Coalition operations. The RAF is celebrating its 100-year anniversary (RAF100), so GA-ASI seized the opportunity to fly the newest MQ-9 version, MQ-9B to RIAT. The RAF configuration of MQ-9B will be called PROTECTOR RG Mk1. Artist’s impression of the Protector RPAS ordered for the RAF – a similar aircraft flew non-stop from North Dakota to Gloucestershire on 11th July [© GA-ASI.]

MQ-9B is the next generation of GA-ASI’s multi-mission Predator B fleet. GA-ASI named its baseline MQ-9B aircraft SkyGuardian, and the maritime surveillance variant SeaGuardian. MQ-9B is a ‘type-certifiable’ (STANAG 4671-compliant) version of the MQ-9 Predator B product line. Its development is the result of a five-year, company-funded effort to deliver a RPA that can meet the stringent airworthiness type-certification requirements of various military and civil authorities, including the UK Military Airworthiness Authority (MAA) and the US FAA. Type-certification, together with an extensively tested collision avoidance system, will allow unrestricted operations in all classes of civil airspace.

Paul Armstrong, Senior Vice President of Cobham Aviation Services UK, said: “The SkyGuardian trans-Atlantic flight is a significant and exciting event for both GA-ASI and for the future capability of the RAF. Cobham is proud to have a teaming agreement with GA-ASI for logistics and maintenance services, which builds on our present support of the Reaper Ground Control Stations. We look forward to working with both GA-ASI and the RAF as the PROTECTOR RG Mk1 comes into service.”